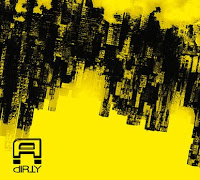 The interlocution of extreme metal and electronica/industrial elements is one I've followed for quite some time now, having worked on several such projects personally that hybridized jungle, trip hop, breakbeat and ambient with harsh guttural or snarled vocals, tremolo picked guitars or just straight out lattices of calculated chugging since the middle of the 90s. In that time, I've noticed two overarching camps emerge from the process: esoteric artists who remain alongside, or ahead of the curve, utilizing minimalistic or modernist 'glitch' concepts, meticulously constructed industrial rhythms, and those who simply seek to fold redundant techno cliches from the late 80s or 90s into the convention of metal riffing techniques, double bass and blasted drum patterns, often dialing up the speed to levels not expected of living, breathing musicians.

Italians Aborym have always interested me, since they seem to strut along the razor-thin line between these two: occasionally summoning up some inspired progressions, but just as often subsisting off some groan- inducing cyber rave bullshit circa Combichrist, Marilyn Manson, whatever. Granted, the latter can be entertaining if done well, but that's just not always been the case here. While their debut Kali Yuga Bizarre remains their career highlight for me, thriving off an apocalyptic, ritualistic foundation that was a more novel concepts in its day, I've found a lot of the intervening material (four albums worth) to be rather inconsistent in quality. Dirty, the group's sixth full-length, was a study in contrasts from first exposure. The surreal, inverted city skyline on the yellow background gave me the impression this might have been a fully electronic outing, perhaps by way of Autechre or Aphex Twin (there IS a song here called "Raped by Daddy", so that might have just been mental association with "Come to Daddy"). But, by and large, this is business as usual, a mix of the dichotomy of components I mentioned above.

Dirty ultimately amounts to a nightmarish landscape infusion of acoustic and electronic sounding drums with a heavier emphasis on blast or 'gabber' styled beats, denser chugging, power chords, or tremolo progressions on the guitars that quite often play second fiddle to the atmospherics, and wretched black rasped vocals that unfortunately often give way to some weak, clean singing. Which, in no case, ever really enhances the music or gives me any respect for the band's eclectic intentions. Several of the lyrical choices here are just too goofy to stomach, like the higher pitched, nerdy repetitions of 'Fuck you' that adorn the bridge sequence in "Irreversible Crisis"; but the vast majority of intonations here are drenched in Malfeitor Fabban's decrepit, impetuous drawl which resembles Agathon on the older Gloomy Grim records. The synthesizers definitely run the gamut from wave-rave pads, to chopped and craftily syncopated surgical patterns, to more of a freakish, sweltering post-modern orchestration. You can tell a lot of effort when into their structuring, and to evoke a suffocating sense of both factory floors and gas-lit dystopian streets, which is sort of the point.

The industrial sounds are well plotted to create a mixture of harder edge IDM and old school assembly line atmospheres, which are then slathered in the meatier, opaque pummeling guitars. Truth to be told, as I went through the first disc a number of times, interesting patterns emerged. "Across the Universe" and especially "Bleedthrough" impressed me, but "Dirty" itself lapses into some pretty memorable, crashing grooves. Then you've got a song like "Face the Reptile" where some of the speed and forcefulness is alternated with a more haunting, dissonant field of notation that gives the listener some space to revel in his/her horror. Though I would not say that this was a 'standout' record in term of catchy guitar lines, they're at least properly fixed to the electronic rhythms, so it feels as if they were all composed simultaneously rather than arbitrarily tossed onto a beat as an afterthought. Bass lines are loud and probing where they need to be, and the mix, while hostile and abrasive, is rich enough that you can detect the subtleties of the electronics. A lot of folks will dislike the choking level of detail on principle, but it's working as intended.

Alas, I just can't stand the clean vocals anywhere on this album, and it just doesn't seem like the sort of work which required anyone's 'Inner Goth' to rear its ugly head. I would have been fine with just the rasps, growls and maybe some ear-splitting screams. It also doesn't help that the two reworked pieces on the bonus disc, "Roma Divina Urbs" (from the debut) and "Fire Walk With US" (from the sophomore of the same name) remind me of how much more I liked those albums than this one. Riffs and atmosphere are perhaps less harried, but immediately more evocative of the dark mental spaces the band inhabits. Not that there's an incongruity in how they got from 'there' to 'here'. No, it's a natural progression, but one could say they haven't evolved a whole lot since the second or third effort, and that the experimentation which initially distinguished Aborym might have reached the last stop on the line somewhere in the mid-00's. This feels as if they've become a bit comfortable with the rampant, metal-injected techno-trauma, and thus it doesn't exhibit the eclectic, uncanny variation you know they are capable of.

The cover choices on the second disc are, in fact, diverse, but also some pretty safe choices. "Hallowed be Thy Name" has an interesting first verse sequence where they basically introduce Iron Maiden to a Dance Dance Revolution platform with pulsing, sweeping synthesizers, but after that transforms into a fairly normal 'extremified' rendition. Nine Inch Nails' "Hurt" is given a straight forward, if somewhat more orchestral and dramatic treatment, and it might be the one place on the album where the cleaner vocals don't make me cringe, with the caveat that they're aping Trent Reznor closely. Aborym also delivers us an interpretation of "Comfortably Numb" which is slightly more acidic and psychedelic due to the enhanced use of electronics over the original, but the interplay of vocals and instruments simply isn't as smooth and effective as Floyd did it. Don't get me wrong, it's cool that the Italians have such broad influences that they want to share, but aside from one-time curiosities these tunes don't provide much lasting impact, and the reworked originals do not necessarily supplant the older versions, even if the production feels more fluid.

In the end, Dirty definitely was not the disaster it might have been, but there are a few obstacles which hindered my enjoyment. If you're a devotee of electronic/extreme metal bastardizations, and seek heavily layered, textured and nightmarish material to dance your life away, you might find enough exhilaration here to make it worth the while. The album's like an oil rig: imposing and unnatural, with lots of working parts and rusted foundations and surfaces, and that alone is interesting enough to explore. But coming away from the experience, did it dim my perspective? Leave a scar on my psyche? Thrust me into the dystopian dreams I so often encounter through the ciphers of music, film and literature? I can't say that was the case, but to the Italians' credit, at least they dumped a lot of planning into its design.