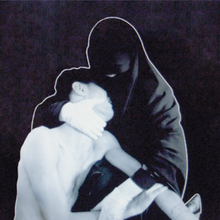 Ed note: the album review contains notes on a live show, which was held at The Beacham in Orlando, FL on 16 April 2013.  Crystal Castles took the stage roughly around midnight after opening act Doldrums.

From the outset of Crystal Castles' third self-titled effort, you can tell not everything is right.  Even before listening, the album art invokes some sense of discomfort.  It features a hooded figure shrouded in black except for its maniacal grin--female?--embracing a naked male form.

The opening track immediately begins with a nightmarish siren of sorts, perhaps signaling some fel beast coming from planes where reality is unstable.  Slowly synths stagger forward methodically, and we hear Alice Glass's voice for the first time.  Here she is lulling, but it's not long before her distorted, airy, distant pseudo-punk vocals begin shouting, almost unintelligble, except for one line: "I AM PLAGUE!"  Almost as if that is the only part of the song we are meant to understand.

Alice Glass is the unquestionable image of Crystal Castles, adorning most all of its merchandise in offbeat ways.  A bloody, Madonna-esque drawing.  As two pink, naked succubi with their tongues lolling.  That image carries onto the stage, with her torn tights and punk boots, thrifted clothing hanging loosely off her gaunt figure.  She drinks directly from a large bottle of vodka in one hand she carries with her frequently, the fiery cherry of her cigarette occasionally flaring up in the dark on stage.

Her performance is littered with her crowdsurfing, while she continues to sing.  It's become a fetish of fans to do everything they can to touch her. When she leaps down, there's a sudden surge of bodies forward in the crowd and it's easy to find yourself completely flattened on all sides, like Kirby.  There's other assorted hijinks that, perhaps, should stay with those who saw that individual show.  Needless to say, Alice is a miscreant.

Ethan Kath, who represents half of Crystal Castles, is less prominent yet equally impressive.  He was honored, along with Alice, together, as the #1 Icons of 20 Years at Lollapalooza.  Live, he is found usually slumped over, tinkering with his keys and nobs and pedals and switches, typically quiet except to occasionally berate the crowd for not being loud enough.

Interestingly, though Kath and Glass both come from punk backgrounds, their contemporary music sounds decidedly electronic: specifically (III).  Certain tracks would make instant dance club favorites, especially one track called "Sad Eyes," whereupon its beginning literally everyone in the crowd started jumping up and down rapidly.  A personal favorite for obvious reasons.

Each song is beautifully cut from the same fabric, customized and woven back together into a beautiful quilt of dark, electronic goodness where dark lords command skeletal stormtroopers, as the landscape slowly fades into a pixellated, poisoned point in the distance.  Faded black, shot through with purple, blue, pink and blinding white.  Banners of false prophets streaming in the wind.

Perhaps the most charming thing to me about Crystal Castles is its refusal to take itself too seriously.  Alice and Ethan make a true spectacle of a show, and played almost two sets when I saw them.  They're a true treat, and to venture sounding like a fanboy, one of my favorite acts.  I often pine to relive the show I saw, a bittersweet feeling.

Post-it note: Doldrums was impressive as the first act, featuring an odd looking frontman who spent most of his time singing using a custom-built suitcase with vocal effects built in it to make himself sound female or terrifying, and anything else he desired.  The band is unique and worth investigating.

you can't disguise sad eyes
Posted by JD at 1:55 AM