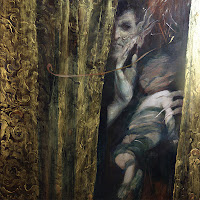 Regardless of whether or not Venus Star's prior, 2012 effort left much of a lasting impression upon me, the novelty of multi-instrumentalist and vocalist Atvar's approach to the black metal genre was not one to scoff at, ensuring that the project's name would stick just as much as any of the others he'd worked in (if not the music itself). Nigredo Expulsion, the third full-length from this project, does not deviate heavily from the aesthetic choices of Setyphorus, but for whatever reason (the cycle of the moon, the stars in alignment, etc.) I found myself relating better to the drudging, gnarled foundation and the intercessions of enchanted, sparse doom melodies that occasionally wafted over the churning substrate. If you can imagine a meeting point between Beherit's blackened primacy and the caustic grooves of early Godflesh, that is perhaps the best basic description I could give of the style; which is riddled with potential and possibility, since it's not just another example of umpteenth generational black metal that focuses heavily on the tremolo guitars, blast beats, orchestral sweeps, raw production or other cliches that we normally associate with the medium.

No, Nigredo Expulsion is unusual in its marriage of abstract, gorgeous visual stimulation and dirty, swollen sounds. The drums are constantly shifting and grooving with a purpose, often at a doom metal lurch, but the tinniness of the cymbals and snares actually works well in conjunction with the corpulent rhythm guitar tone, which is bulked up and tuned so that they resemble a mix of Streetcleaner and old Celtic Frost. Some of the songs, like opener "Trans-Plutonic Traffic", rely heavily upon a minimal chord progression and don't offer much by way of variation or atmospherics, but these are kept brief (in this case, two minutes) enough that you don't feel as if something 'other' was required. But across the track list as a whole, there is some clear variation; instances where faster picked guitars set up a writhing, bombastic groove ("Extrance") or Atvar embarks on some truly morbid, layered pairing of glinting despair and low-end, steady pummeling ("Resume the Bestial World") which is incredibly dense and hypnotic, and I couldn't get enough of it. Other among the strongest pieces here were "Ash and Fire" with its escalating, evil chord progression and neanderthal ballast breaks; and the doom-stricken closer "Daggers" which opens with nearly a minute of these thick, sludgy, standalone guitar lines before the drums and vocals arrive to form an incredible Sabbathian groove.

The music alone is pretty strong, but what puts it over the precipice into true madness are the tortured, thick rasps of Atvar which feel like the man is being genuinely stretched, stabbed and splayed out on some antique punishment device, suffering a Promethean fate where eagles (or vultures) then pick out his innards. He's snarl, he'll even growl out some sustained, death metal-like inflection for a mildly dynamic range. By the time the 33 minutes of spiritually draining, nebular haze comes to a close, you feel devastated, which is not an emotion I took away from Setyphorus so much. I also loved how the descriptive, poetic lyrics were laid out against the swaggering trudge of the grooves. A poignant contrast of beauty and ugliness. 'Sentient glyphs adorn/a passage to hindquarters/veiled catacombs glow/in a maze of walls and doors'. A lot of cosmic, esoteric imagery is painted in almost direct violation of the painful, pummeling undertow. 'Turbulent gushes/harrowing formulas/a beast-growl vile/of no human tongue'. Wonderfully realized and developed, with no extraneous or unnecessary complexity. 33 minutes of points being made, bones being ground up, suns being extinguished, and just a stronger overall, more consistent balance of material than the prior album. Nigredo Expulsion is not perfect, and a few of the riffs can feel sodden and uninteresting at times, but as a testament to how its rudimentary songwriting can pair with deeper, transcendent themes, it succeeds with ease.