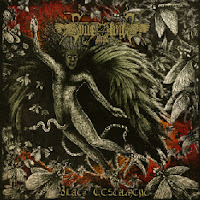 Svartsyn has a pretty distinct ability to reinvent itself on each new album without abandoning the black metal genre whatsoever, and upon the Swedes' 7th full-length, Black Testament, there is once more this sense of aesthetic shift. The last (new) record, Wrath Upon the Earth had a soil-like, unnerving texture to it anchored by ghastlier black/death hybrid vocals, but here, both the music and vocals have ventured back into a stricter black metal territory. What's interesting about this is just how much atmosphere Ornias is able to wring out of all the layers of tremolo picking. Chugging and open chords exist throughout the composition, but the sheer savagery and wealth of rapidly plucked note progressions is very redolent of Norway's Immortal through the mid 90s. Churning and cold punishment dealt out at high velocities with little forgiveness. Melodies are not presented as blossoming flora, but sharp edged fragments of stone that chisel away at the listener's countenance until he or she is as weather-beaten as the songwriting.

All of this is dowsed in this constant sense of airy, forward motion (also reminded me of Immortal), which occasionally lurches into this spike of vitriolic, simpler notes that reek of evil. The breakdown in "Demoness with Seven Names" or the writhing escalations inaugurating "Eyes of the Earth" are solid examples of how, despite a lack of complexity or perhaps novel ideas, the simple tremolo riff techniques can still stab your dreams. Drums are performed with a meticulous, callous hostility that feels like a field of robot workers being accelerated for maximum productivity. The kick speed is just insane, and strangely, while they are clearly audible throughout the disc, they are used simply as a seat for the more robustly textured, searing guitars. I won't lie: there is a tendency here to just blast away which can imbue a numbing monotony to the entire proceedings, and I wish there might have been a fraction more variation in how some of the tunes were structured. But there are definitely some breaks in the action where the drums and riffs will take on a more thrashing pace, and the sheer proliferation of Ornias' riffing ideas helps to soak up some of the potential boredom. Some extreme black metal records are just level planes of blasting and recycled riff patterns, but Black Testament is more of a cracked, cold steppe, where sharpened clusters of rock break up at regular intervals across the flat ground.

The bass guitar is vaguely audible throughout the experience, being performed at speeds equal to the guitar in most cases, but it's often not a feature in music of this style. Ornias' vocals are nothing unusual in black metal, yet the rasp is convincingly dry and aggressive when it catapults out over the ballistic riffing progressions and its fully flush with its incendiary environment. Even despite its tendency to mash-up traditional, predictable  Scandinavian black speed with wave after wave of clashing rhythm guitars, I actually found this a worthwhile effort which would occasionally hypnotize with its unbridled intensity. The drumming and pacing could have been more dynamic without the guitars suffering, but you can easily lose yourself in the picking whiplash and haunted, deep snarls that hover over its unforgivable landscape. Svartsyn has also had a long series of curious, cool cover images on their releases (excepting perhaps the original debut), and Black Testament is no exception, with a rustic, autumnal, freakish nature spirit with what seems like a serpentine phallus, surrounded by wing-beating locusts or other fiendish insects that almost look like leaves at a distance. Now, imagine that thing leaping out at you on your next bird watch or garden tour. Things like this are why I choose to stay indoors.