Damnations Hammer - Disciples of the Hex (2012) 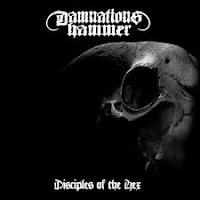 Deathhammer. Nuclearhammer. Demolition Hammer. Master's Hammer. Hellhammer. Witchhammer. Fisthammer. Metal music is a veritable hardware store of pounding, beating, slamming, bashing, thumping, knocking, whacking and smashing implements that can now expand its inventory by one brand: Damnations Hammer of England, which certainly have little hesitation when it comes to the act of driving nails through ankles and wrists on its full-length debut Disciples of the Hex. The downside of this is that might be one of the few things I actually enjoyed about the record, for while it's certainly hammering along with a sense of purpose, anger and self-identity, the stripped down composition of rhythm guitars often delves so damn far into the painfully familiar and predictable camp that it can never stave off the redundancy.

I've seen the band characterized as a doom/death hybrid, but must respectfully disagree, as this is far more of a doom/thrash blend and none of the traits of 'death metal' are anywhere to be found through the 41 minutes. This doesn't subsist on guttural vocals, tremolo guitar picking, brutality, or any of the usual suspects, and it would be dishonest for me to even compare it architecturally to earlier death or death/thrash from the late 80s other than the fact that it's dark, heavy, and played with the same instruments. No; beefy, effortless palm-muted riffs, generally involving no more than a few notes, and placed at a steady, mid mid tempo, are the norm here, and they evoked comparisons to both 'cruise mode' doom staples by bands like Sabbath, Cathedral, Candlemass and Trouble, and a harsher bite of thrash and groove metal which could recall from slower Sepultura, Crowbar, Hellhammer/Celtic Frost, or Stormtroopers of Death in that half the rhythm guitar progressions might have functioned on the intro splash to Headbanger's Ball 25 years ago. Really, really simple and accessible choices in notation which, had they thrown a few more curve balls, might have clubbed me into caring, but unfortunately wound up feeling stagnant and uninspired.

This sort of technique is a crap shoot, after all, and has been since bands have been endearingly emulating the Tony Iommi method of chugging and doom metal became an actual entity unto itself. But, if I take an oldie and goodie like the verse of Candlemass' "At the Gallows End", one of my favorites to employ the process, I'm given an evil, unforgettable sequence of notes that functions wonderfully with the haughty, operatic intonations of one Messiah Marcolin. Here, the riffs in the verses of "Throne of Fire", "Serpent's Wrath", and "Harbinger of Darkness" seem as if very little thought or calculation went into them but palm muting along and striking the one, banal off-note. All too similar. "Impaled on the Horns of Betrayal" was another letdown, yet at least there they injected a fraction of dissonance into the notes that felt marginally fresher. But really, the only way this could get any more minimalistic for me is if they just hit their open strings and let them ring out for 5 minutes. And when played this artlessly and straightforward, note choice is the KEY...a key which the Englishmen left behind at the aforementioned hardware store. If I had just gotten into the genre yesterday, and this was one of the first records I'd heard, I might be more forgiving, but after tens of thousands and decades of metal albums, these are just not gonna cut it.

Now, don't get me wrong, those are not the SOLE sorts of riffs that appear throughout Disciples of the Hex, but even the slower, trudging doom grooves like those played with the gathering percussion as the intro "Defiance & Retribution" which leads into the predictable crawl of "Throne of Fire" fare little better. Where Damnations Hammer become a little more curious is in their choice of vocal style, which is a meaty and manly, constipated sort of inflection which I've not often heard fronting such doom-styled guitars. I could say that it conjured up memories of local Boston area thrash acts like Wargasm and Formicide in the 80s, but the comparison might be lost on most readers. At any rate, this is not an approach you hear every day, and I feel like it compliments the palm-muted riffing style rather well. Occasionally it seeks to thrive off a repetitive, monotonous meter during the verses, and thanks to the blandness of the guitars, I felt a double whammy of disinterest. Naturally, there's not a lot of melody implied in the vocals, which might have helped; but being that I'm so constantly inundated with Ozzy-a-likes or generic gutturals that fail to emit any of that tortured burden that I require of the genre, Damnations Hammer gets props for at least trying.

As for the other instruments section, there wasn't a lot going on aside from supporting the rhythm guitar. The bass lines in particular are too plain, where more curves and fills would have potentially helped to better round out the unimaginative riff progressions. The tone is fat and oily enough to add credibility to the raw heaviness of the rhythms, but not much more. Drums up the ante with some solid, simple double bass patterns, and you can feel the air rise off the kit, but in general they stick to the driving rock patterns one usually associates with acts like Trouble, Candlemass etc. Hardly a revelation, since doom has rarely been a platform for a confluence of showy beats and fills. I did actually enjoy the use of ambiance through the album, as sparse as they were. Even if its nothing like the metal tunes, "The Hex II" with its swells of gentle trauma was the most engrossing piece for me, and there are other moments where they'll just let some feedback roil off before lurching into the next deadpan riffing progression, and it builds a decent contrast. I also dug the narrative segue in "Disciples of the Hex", with a deep, ritualistic tone.

Another strong point: the lyrics. Granted, Damnation Hammers fixation on the writings of H.P. Lovecraft and Robert E. Howard is nothing out of the ordinary, and honestly quite a cliche among heavy/doom, death or black metal acts in the 21st century, but they're well enough scripted, and reading along to "Disciples of the Hex" or "Impaled on the Horns of Betrayal" where lines like 'Sentinel macabre/blades and sallow skin', 'intravenous toxic blood' or 'bait the traps with flesh' reach out at you was one of the highlights of the album. Even there, though, I can't claim there's complete consistency, since "Throne of Fire" and "Serpent's Wrath" are a bit too obvious, simple and repetitive in their imagery. This is clearly the area in which the band needs the least amount of development, since the music itself doesn't capitalize on the harrowing intensity of the words. I never once felt menaced, ravaged or even vaguely interested by the metal riffing here, so even if Edgar Allen Poe himself had written the lyrics, it wouldn't have redeemed the sum experience.

I've been hard on Disciples of the Hex, yes, but it's generally an inoffensive record of which the few good ideas aren't compounded or supported by the remainder. Not awful, and no terrible impressions, but as early as my first listen through the track list I felt like the creativity of the guitars came up very short, and further spins didn't alter my opinion. And since this is such heavily guitar-dominated music, the result is to cripple what might otherwise have been a solid occult punch to the gut. More interesting riffs, groovier bass lines that don't constantly cling to the safety net of those riffs, and wilder vocals (using the same general style) would go a long way towards crafting something far more epic and worthy of Damnations Hammer's chosen themes, and a long way towards preventing me from nodding off from guitar progressions that seem little more than the first, familiar impulse that came to mind during their construction. I fear I was a bit unmalleable under this particular bludgeoning, but I'm still filing this under 'could potentially be cool'. I'll just have to wait to see, and hear.