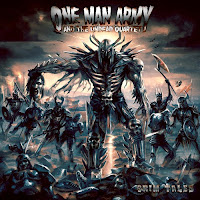 After their Nuclear Blast deal came to a close, One Man Army and the Undead Quartet were thrown another strong opportunity, to join the Massacre Records family. Thus, they still had the potential to make a name for themselves, even if the first two records didn't really pay off in anything more than a faintly audible level of buzz. Grim Tales is a better produced, better written record than either of its predecessors, and the first that I can claim to have 'liked', so naturally it wasn't incredibly well received at large and further sunk the Swedes into near obscurity (even though a few of the members could always run back to their other, better known bands like The Crown). This isn't exactly unique stuff, and it's possibly the most straightforward of their records, lacking the charm and variation of the sophomore, but it firmly wedges a skull-adorned boot and greave up your arse and then leaves it planted there for 46 minutes.

Duration was an issue with the first album (an hour of mediocrity is an hour too much in my estimation), but then they tightened that down for Error in Evolution to about 40 minutes, which paired with the newfound enthusiasm in the writing, proved the stronger of the two. To its great credit, while longer than the second album, Grim Tales fills itself out well enough that you don't really notice. Classic West Coast 80s thrash triplets and charge rhythms dominate the battlefield, with noticeable nods to Metallica or Testament in not only the pacing and construction of the guitars, but in how some of the burning, bluesy lead flashes remind us of what Kirk Hammett might have snatched from his creative ether during his prime. In other places, you get a lot of perky, squealing Zakk Wylde techniques built into the rhythm guitars which recall an album like No Rest for the Wicked, or perhaps more directly Alexi Laiho's playing (which is itself obviously built upon Wylde and Rhoads). Good use of melodic chords, vibrant energy and the truly level production of the guitar, which dominates without drowning out the rhythm section, ensure that the riffs are hits more than misses...

...and that's a first for this band. Cuts like "Misfit with a Machinegun", "A Date With Suicide", "The Frisco Reaper", "Dominator of the Flesh", and "Saint Lucifer" are genuinely catchy and engaging whether it's the riffs behind the verses or the lead snatches, and the remainder of the material isn't far behind. Beyond that, Marek Dobrowolski's playing here is fucking phenomenal, with a perfect mix emphasizing both the snares and drums but losing nothing else on the kit. Conversely, I felt like the bass guitars had less of a presence, but you can still trace them along under the rhythm guitar. As for Lindstrand, he's vastly more forceful and consistent here, rivaling even his better performances in The Crown. There is no reliance here on clean, emotional choruses which forced a mix reaction to Error in Evolution: here he's snarling and growling and some effects and layers have been placed on his voice to have it bouncing all over the belligerent guitars, which ultimately gives this record a lot of its atmosphere.

But, in the end, it's just the consistency that drives this one across the finish line. Some might rue the lack of exploration (or 'fucking around') that was tangentially present on Error in Evolution, but as much as I enjoy expansive bands that stretch out past their comfort zones, I'll take a 46 minute ass whooping any day than a failed experiment. Grim Tales isn't that distinct or creative, perhaps, with decades of thrash and death metal already supporting its existence; but it is fully self-realized. No decisions here need to be questioned by the listener; just dive in and dance in its aggression. Apart from (maybe) a few of the song titles, there is nothing remotely silly about this record. The lyrics are quite good, the best of their discography, you really feel the sickness and psychosis in a tune like "Cursed by the Knife". It was convincing, and no longer felt like a band-just-made-up-of-guys-from-other-bands-who-just-wanna-have-fun-together under an outrageous moniker. No, Grim Tales was something to be reckoned with, and while it's far from mandatory, it's an easy recommendation for fans of Carnal Forge, Witchery, Terror 2000 and the first few albums by The Haunted.