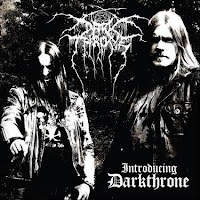 Recall2CD is apparently no misnomer, because the imprint brand, a sub label of the Snapper Music family (which also includes Peaceville and KScope), is dedicated wholly to issuing two-disc collections of reprinted material spanning the careers and catalogs of acts associated with the sister and parent labels. So, along with Introducing Darkthrone we've had Introducing Katatonia, My Dying Bride and so forth and really you get the gist of it. The fact that these releases have been relegated to a separate imprint is telling, though, they've been set up more or less as '101 courses' for new listeners, with basic biographical information enclosed, a visual catalog of the band's albums available through the label, and you can pick it up either on CD or MP3 at a normal price...

...and that's the rub, because priced at $2-3 dollars, or better yet FREE streamed/digitally, Introducing Darkthrone wouldn't be a horrible access point for someone first exploring black metal, or this band in particular, to get a chronological perspective of how Fenriz and Nocturno Culto first instituted and then later changed up their game across about 25 years. It's entirely dispensable, and 18 tracks is in NO FUCKING WAY going to do any justice to a discography which includes 16 full-length albums and numerous EPs to boot! Previous Darkthrone collections like Preparing for War and the Frostland Tapes proved worth the while for the avid consumer, because they were comprehensive or included something of value (a nice DVD, a thorough selection of the band's unavailable demo recordings, etc), but the material here isn't re-recorded, or particularly equalized, or anything to 'refresh' it. Which, honestly, would be a 'no-win' situation, since the point of something like this is to show how the band's sound had evolved in their many different phases.

Suffice to say, Darkthrone is an important band, and a mere smattering of cuts cannot aptly represent their appeal. Each of their individual full-length albums casts a particular shadow, establishes a mood that in my estimation usually requires complete immersion to appreciate. Sure, they've got a handful of the more fun and obvious, 'bubblegum' writing present in their punk and speed metal numbers of the last decade, and these are immediately catchy, but then they only represent the last five tracks on the compilation (and exclude the latest album The Underground Resistance). Using "Cromlech" alone as an introduction to their death metal material, or single song selections from some of the most important recordings in the entire genre like A Blaze in the Northern Sky, is simply not going to cut it, and as much as I worship Dark Thrones and Black Flags, I'm not sure why it nets two inclusions while an ageless, fundamental work like Transilvanian Hunger nets just one. Personally, I find them both equally entertaining, but there can be no question which is the more influential and critical for a new listener to comprehend...

It'd be pretty difficult to rattle off names of Darkthrone tracks that I don't enjoy, so naturally I don't have much of an issue with the choices here, and they all still sound as great as they did when I first heard them (testament to the timelessness of their aesthetic choices), but in context I feel that many of their records are better experienced in 'blocks', where the raw tone and overwhelming bitterness don't disappear after a few minutes, so in no way could I recommend this in a time where a curious party has the means to instantly acquire any and all of the content and then some (whether legally or not), and the same could be said for the other collections being put out through Recall2CD. Reeks of Roadrunner's old practices with their death metal bands in the 90s. The packaging is nothing special, the biography is old hat to anyone who already knows the band, and it all seems vaguely like a tactless retread meant to bilk a few pounds/dollars from some suckers. If you are one such individual, then feel free to skew my review score up to 30-40%, since you're still not going to behold enough of the real, emotionally draining depth of the earlier work or the mockingly rocking nostalgia of their later catalog to matter.

As for myself, Introducing Darkthrone is utter tripe, and the materials used in pressing these collections would have been better used in fashioning prosthetic limbs for amputees or plastic sippy drinks for school children. 'But I can play it at parties, or weddings!' Fuck RIGHT OFF. You wanna get someone into Darkthrone? Grab a flask of whiskey or equivalent, at least one of their full-length albums, and a boombox; take the prospective listener to a defaced local castle/landmark (graffiti preferred) or a woodland or park littered with abandoned automobiles and other social detritus. The closer to winter, the more effective. Take a swig and trade off. Apply volume liberally. Bonfires or oil-drum-fires welcome. If that doesn't work, then the subject doesn't really deserve to listen to Darkthrone. Try Katy Perry instead.