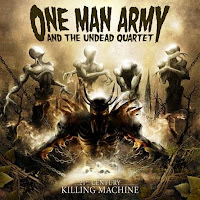 One Man Army and the Undead Quartet was a Swedish band which kept a relatively low profile despite their numerous advantages. A band moniker that really stuck out from the crowd, superb Anthony Clarkson artwork which many bands would kill for, and a Nuclear Blast signing for their first two records. On top of that, even though they were not strictly a thrash band, they emerged at a time when the niche was starting to pick up steam again, and actually released all their albums through that very period. These weren't new kids on the block either, having cut their teeth in acts like Grief of Emerald, Incapacity, and most notably, the front man Johan Lindstrad was a member of The Crown when they first started to blow up internationally in the late 90s. So, with all that going for them, why is it that 21st Century Killing Machine failed to make much of an impression?

I can't speak for Europe, where the band obviously had a live presence with some festivals and touring, but they received nary a whisper in my own neck of the woods. This was one of those albums I picked up on impulse because I was surprised that they had a release out on one of the bigger metal labels, realizing only later that it was Johan's new band. Unfortunately, he seems to have traded down here, because if there is one thing lacking from 21st Century Killing Machine, it's the incendiary energy with which his alma mater lit up the studio on the records Hell is Here and Deathrace King. The Crown is a safe comparison for One Man Army, along with Witchery, though the focus here is almost entirely on mid-paced rhythms and the establishment of professional production values rather than explosive, memorable death/thrash anthems, and ultimately that is this debut's undoing. I don't know about you, but I have little interest in wasting an hour on plodding, average riff progressions that go next to nowhere. The album is far too long (just under 60 min. with the bonus tracks), and there's very little music of interest, thus even less replay value...

It would take me less than the fingers on one hand to count the number of times the rhythm guitars actually caught my attention here, and even then it was usually at the beginning of a track like "Killing Machine" or "Hell is For Heroes" where the moderate thrashing pace was solid enough to generate some interest in what was about to follow. But there is never any payoff: the choruses are lackluster, the tension and building of the various rhythms bland and uninspired, the melodies faint and few between, the handful of simplistic leads not able to compensate. Lindstrad's vocals were never among my favorite in the Swedish scene of the 90s, but here he manages little more than a stock, gravelly growl permeated by a few whispered emotional segments, and especially in the choruses the guy fails to evoke any excitement whatsoever. The riffs are dense, thuggish and have an appreciable level of punch to them, but with only the scant exceptions I hinted at above, they all play out in predictable and unimaginative patterns, at best picking up to a rapid mid speed, but occasionally lapsing into tired groove/thrash metal tropes somewhere between Pantera and Helmet in context.

The rhythm section is admittedly quite good here, with a potent and loud bass presence and some crack drumming that remains consistent at any speeds. For instance, the rampant double bass work on "When Hatred Comes to Life" is pretty tight near the bridge. The snare and toms are poppy and clean, but they really slice through those fat bass guitars and create a concussive backdrop to the compositions. The fault lies solely in the guitars' inability to create rhythm licks or specific leads over them, with second rate riffs often just paraphrased from bands like Exodus. Beyond that, the lyrics, which you'd think might take on a more ghastly horror aesthetic, seem like more of the same sacrilegious throwdowns that defined Johan's years in The Crown. You get the self-referential, pseudo-conceptual hints of zombies and terror, but it's never interesting, and ultimately 21st Century Killing Machine comes across as a hollow experience with high production values, that might have been so much more if One Man Army and the Undead Quartet were stronger songwriters. This is all merely moderate action to which you might bang your head if you had nothing better to do, but this first selection of tunes is too easily forgotten and returned to the CD rack, right between Exodus' offensively average Exhibit duology and Onslaught's post-reunion material.