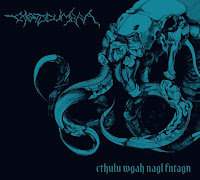 Mexico isn't exactly the first scene I'd think of with regards to harboring a massive H.P. Lovecraft hard-on, but I'm almost positive the country has featured in some of the broader Mythos fiction down through the decades. That said, after hearing Castleumbra's 2012 EP, Cthulu Wgah'nagl Fntagn, which has seen a more recent re-issue through Greek imprint Nuclear Winter Records, I doubt I'll ever be able to envision that most infamous of Old Great Ones without a bottle of tequila in one claw and a few tentacles wrapped around one or more señoritas of choice (His choice, not theirs). A slimy summer siesta by the poolside, sponsored by Mindsucking Parasites from Beyond the Threshold of Reality, hosted by two of the Central American scene's most storied extreme metal fiends, Antimo Buonnano and drummer Alejandro Franco, who you may recognize from sick acts like Ravager, Profanator, Disgorge and Hacavitz, Antimo having even done a stint with Singapore's Impiety some years ago.

Needless to say, this isn't amateur hour at the shrine of the Elder Gods, and Castleumbra is the duo's entry into the nostalgic death metal sweeps, possessed of a fuzzed out, ominous fury that is unquestionable bound to entertain anyone who enjoys just anything that has manifest in this modern wake of Incantation and Autopsy. Disgusting guttural vocals in the Craig Pillard mold trample a heavily saturated, muddy rhythm guitar tone so enormous (like its fictional inspirations) that it simply cannot be contained within the borders of human sanity, while behind the writhing, grotesque Mass the beats thunder along like a stampede of angry shoggoths just waiting for their own chance to feast upon the Earth. Bass is just as oozing and voluptuous as the rhythm guitars, so during the three full-on metal tracks the listener is placed in an entirely uncomfortable, unwholesome and mind-grinding morass of wretchedness from which surrender and suffocation might be the only release. This is ugly music! Working as intended, but overwhelming to the point at which some might find it confusing, so thankfully they break up the faster bits with grooves redolent of the same Swedish forebears that were also partially responsible for the lineage of the guitar tone...

Now, I always have been and will forever be a riff guy. That is what first drew me into each successive niche of metal since I threw on the training wheels, and in this department, Cthulu Wgah'nagl Fntagn does not exactly excel. Especially when they're bludgeoning or churning along off an intense blast beat and really more interesting in making mince meat out of the audience than grafting some memorable progression onto their skulls. In general, the construction of the riffs is based around a readily apparent selection of old Carcass, Repulsion and Autopsy motifs swathed in the Swedish overdrive and feedback, though they really take this to a lot more brutish level than your average Dismember of Entombed acolyte. But clearly they're capable of conjuring some filthy, evil sounding grooves and melodies when so inclined, as in the closer "Ream of Utumno", which along with "Naamtaar Kingu" represents the most substantial and engaging material on the EP. The titular cut is also interesting: a ritualistic interlude with some chanted vocals, throbbing bass and what sound like primordial distorted electronics, but more eclectic than catchy.

Ultimately, this is not something you haven't heard before, and it's not the sort of material you're going to revisit for particular guitar licks: it's more of a 'package trip' down Revulsion Lane, for listeners who simply want to be suffocated by the sinister implications of the lyrics and the unrelenting rawness and morbidity of the instruments. To that effect, Castleumbra is more than functional, and I can only imagine throwing these guys on a stage with comparable acts like Weregoat, Hellvetron, Beyond, Vasaeleth, or fellow Mexicans Denial and Zombiefication. In the end, it just comes down to how much more of this ghoulish old school death metal smothered in more fulfilling, modern production techniques you can stomach. This isn't the best of its style that I've heard in the past few years, but if there's space in your universe for another of these cavernous, crushing forces, then by all means, thrust yourself once more into the maw of this extraplanar space squid and pray the end comes fast.