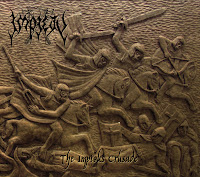 When it comes to Impiety's considerable discography, I find myself returning more often to their filthier, earlier recordings more so than the stuff they've put out over the past 5-10 years, with the exception of their 2009 full-length Terroreign which was so violent and incendiary it nearly blew my vital organs out my back to paste them against the wall behind me. Ironically, I'm thinking that the late teens/early 20s version of myself probably would have taken an inverse stance on the gradual evolution faced by the Singaporean extremists, and looked forward to the days when they developed into a more structured entity, which have clearly arrived over the last handful of releases. This latest EP, The Impious Crusade, continues this process of aural refinement, with a heavy emphasis on Morbid Angel styled-death metal and a little less of that soiled savagery so emphatic on past recordings. Naturally, I'd take Skullfucking Armageddon or Asateerul Awaleen any day over this, because those old records have a lot of character despite their flaws, but from a tactical or technical standpoint, these new originals cover a lot of the bases that fans of recent Impiety would expect, and they do so without abandoning all their hellish history.

In other words, The Impious Crusade is 100% diabolical, vicious and fast as fuck thrash-based surgical riffing with spurts of nasty tremolo picking and an incredibly level of surgical precision, which you normally wouldn't think possible alongside such a whirlwind of hostile drumming and barked lyrics that sound like someone who would fuck you up on the street by stabbing you a dozen times before you could even react. The very dissonant flow inherent to a lot of the riffing here definitely offers a level of nuance to the grisly rhythm guitar tremolo spikes dominating much of the EP, and it definitely reminds me of some of the more intense death metal acts of the last decade like Centvrian, Hate Eternal, and pre-Illud Lamus Maximus Trey Azagthoth, but retaining enough of that ancient war metal appeal that used to run parallel to the US band Angelcorpse. Impiety has mastered this balance of both the taut and frenetic playing for some years now, but one thing that really stood out to me on this release were the lead guitars in cuts like "Accelerate the Annihilation" or the "Prelude (Arrival of the Assassins)", which are unnerving flurries of arpeggios and cracked scale runs that are nothing short of volatile and exciting.

The drums might occasionally feel drowned out, but largely because the listener's attention is going to be so fixed on the complexities of the riffs hurtling all over the abyssal spectrum. Regardless, they're just fucking insane on a Krisiun level of speed and ruthlessness, and they enjoy a pretty honest, slapping production rather than an excessively level of polish. Fills, blasts, and double bass are performed at dynamic levels and the volumes aren't always even, but ultimately that renders it more organic. Shyaithan's vocals are about as pissed off as they've ever been, gnarled and crude and spat out with more venom than a basket of cobras, but even if his inflection isn't your thing, he's also a killer guitar player and a solid bassist...I just wish I could hear the latter more on this set of songs. The tone of the bass is a little muffled and only faintly thumping along and thus the music seems a little mid-heavy. Granted, the drums and guitars provide enough spastic ferocity that you won't miss it long, but I feel like thicker low-end tones would have created a great balance of depth and atmosphere to the speed of the kicks and rhythm guitar licks.

The EP is closed out with a nice shout-out to and cover of Sorcery's "Lucifer's Legions", which a few readers might know from their unsung 1991 classic Bloodchilling Tales. Rather than just trying to sound as Swedish as possible playing it, Impiety have made this their own bitch, lashing her at an intense speed that fits the original material leading up to it, so sort of a classy choice here. But these guys have always had that underground appeal, and no intention of turning their backs on it, and I have to admit, there is some comfort in that. 'Better to reign in Hell...', right? I mean, to an extent, they've never really risen to the fore of these genres, because they're more or less a pastiche of elements from pre-1990 bands like Slayer, Dark Angel, Sepultura and Morbid Angel with a crust of components from the emergent black metal scene, but who would have guessed that 20 years after the Salve the Goat...Iblis Exelsi 7" (which, believe it or not, I think I actually owned at one point and possibly still own), that these guys would still be playing so fiercely?! Asian tyranny forever! The Impious Crusade isn't extremely memorable, and some riffs blaze harder than others, but if you're seeking out some blistering breeze of sickly demon-stench this summer to further sizzle your sun-baked skin, look no further than this...