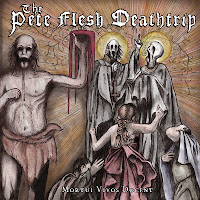 Faced with the prospect of becoming just another faceless Swedrone among hundreds of other old school acolytes, one-man band The Pete Flesh Deathtrip saves some face by pronouncing the very same riffs that made this form of extreme metal viable in the first place, and he injects enough of a blackening nihilism into the guitar progressions and utter savagery of the music that he doesn't immediately condemn himself to 'wannabe' obscurity. Of course, this is no spring chicken here, but the estimable Peter Karlsson, who has been writing and recording extreme metal records for over 15 years. The guy drew blood with Maze of Torment for nearly a decade, appearing on a number of records I enjoyed, and was more recently a member of Deceiver, whose third and last record Thrashing Heavy Metal was far less pedestrian than its title would have implied. In short, this guy knows how to write and deliver a righteous ritual stabbing, so even if Mortui Vivos Docent does fall well shy of perfection, I'm not at all surprised of its competence and consistency.

Instead of the typical, beefy guitar tone we've come to expect from this scene in particular (or those who attempt to honor it), Pete dials back to a more realistic level of grinding intensity that enables him to clearly mete out all the varied tremolo picking sequences, whose melodic content will be just as viable for fans of groups like Sacramentum, Lord Belial, Marduk and Dissection as the gruesome, mid-ranged growls and brutal blasts will be for those expecting traditional death metal. He doesn't resort to cliche D-beat rhythms, and yet again you feel the blackened death/thrash influence of his previous bands quite readily. Best of all, though, is how the ghastly vocals resonate out over the busy riffing like an undead preacher to a parish of ghouls. He has a couple guest growlers here, in particular Micke from Unanimated, and they fit right in. When he implements a 'groove' or breakdown, like the muscling mutes in "Burning Darkness", you can really feel it stand out since it serves as an exception to the rule, rather than a commonplace means to just fatten up a song. On top of this, he's actually got a handful of genuinely catchy, evil sounding hooks committed to the tracks, like the Slayer-ish intro to the superb "God of the Crawling Whore", or the bridge of "Raven's Reborn" which recalls a sluggish Bolt Thrower pacing.

All in all, Mortui Vivos Docent ('The Dead Teach the Living') is just a well-rounded labor of love album upon which you can rely on seasoned implementation of all instruments. The drums and bass are nothing particularly standout, but solid at all speeds in support of the tremendous vocals and riffs. It's not perfectly catchy, with its fair share of familiar or 'missed' opportunity riffs that don't inspire many repeated exposures, but from front to back this feels like an album carefully written and arranged, rather than just a selection of same-sounding death metal tunes that anyone riding Entombed's coattails might have written. In fact, the writing here is just as inspired by Scandinavian thrash or thrash/black metal as it is death metal; it's more Nifelheim than Nihilist, and definitely possessed a lot of riffing sequences that would have fit snugly on one of the better Maze of Torment discs. The production is lavish and sinister, the vocals raucous and vile, if a bit monotone in places, and you feel good and dirty when you're finished. This is a vulture circling in for the flesh and entrails you will no longer need. Carnage and punishment: plain, pure and simple.