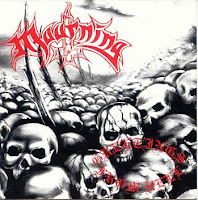 I can only imagine that a lack of availability through the years has crippled Greetings from Hell in terms of its underground popularity, because it thrives at that classic death/doom style whose audience readily devours just about anything retro they can get their soggy paws on. Hell, these people have even made a cult classic out of Winter's Into Darkness, an album upon which the only praise words I could heap are 'crushing' and 'seminal', because otherwise it's so void of interesting riffs and ideas that I might rather listen to a radiator buzz if given the choice. No, Mourning has a sound here that ought to fit right in with the contemporary worship of atmospheric extreme metal, so as I sit drowning in detestable, 95° F summery 'bliss', why the fuck not dust this beast off and have at it?

The Dutch actually had quite a number of gems in this mold, and some of you might be familiar with records like Delirium's Zzooouhh or Sempiternal Deathreign's The Spooky Gloom, both of which were quite impressive and influential upon a lot of European death/doom cults to follow, and both better and more eerily atmospheric than Greetings from Hell. However, Mourning could very much be lumped into that same company, because if nothing else, this is some truly bleak shit, the endless field of skulls and bones on the cover fairly indicative of the 46 minutes of audio. These aren't friendly sounds, and you wouldn't use them to stimulate growth in that garden you've been tending. Dreary, apocryphal, and nearly droning in some of the sparser riffing sequences where the percussion largely cuts out ("Demon's Dance"), it's best defined as a gray waste of steady rhythmic suffering from which there is no salvation until the panned snarls that close out the optimistic finale "Get AIDs and Die".

But, shockingly, Greetings from Hell is not boring in the slightest, since it earnestly augments the brooding doom stretches with intermittent spurts of fuzzed out Floridian antiquity, loose tremolo picked guitars that attempt to recapture the morbid feel of Scream Bloody Gore, Slowly We Rot, The Spooky Gloom and so forth. There's also a massive Hellhammer influence here, not only through the murky, obvious guitar tone but also in how they put together chord patterns to create that same cryptic stench the Swiss invented on their demos; and the occasional, gruff 'hwah' dished out by bassist/vocalist Marc van Amelsfoort. There's also a pretty cut 'n' dry foundation of slow or mid-paced thrash metal here, as if someone took a few riffs from that period and then just slathered them with oozing distortion and despair and turned on the tape reel to witness their translation into a more sluggish, disgusting mutation.

Speaking of van Amelsfoot, he's normally delivering a blunt bark that churns against the rhythm guitar with a fraction of reverb and resonance, very fitting to the aesthetic pessimism of the music. As with many records of this type, placement of lyric lines isn't exactly rocket science: you choke out a syllable or two here or there, and let it cut into the meat of the riffing like an axe felling a tree. The result is that, apart from their inherent sense of enmity and depression, the vocals aren't really all that compelling beyond their base functionality. Fortunately, he's got a nice, saucy, distorted bass tone here that helps flood the basement of the trio's sound, appropriately slimy when everything else cuts out in a song like "Territorial" or the intro to "Deranged or Dead", and fully audible even where it closely follows the guitar progression. Drums are actually the clearest component on the record, standing out even where everything else blends together in the distance. Loud fills, and stock but measured rock beats during the slower material, but not exactly utopia of you're seeking lots of double bass or anything faster than a half-blast tempo.

The tremolo riffs here in tunes like "Sweet Dreams" actually accounted for most of my favorite moments, reeking of genuine negativity and filth even across the span of two decades, but even by 1993 I can't cite them as having a lot of novelty. Clearly Greetings from Hell was second generational in most of its ideas, but what it does well is balance the two parent genres, never overly committing to one or the other. They also keep most of the tracks down to a reasonable length..."Arma Satani" and "Only War and Hell" are voluptuous at 7 and 8 minutes, but both have similar contrasts in pacing that the listener can easily survive them. At no point does Mourning fall back on endlessly repetitive funeral doom riffing cycles, and they toss in enough vibrant if sloppy leads that the album doesn't lose a sense of kinetic energy despite the topical negativity. It's about as 'well rounded' as you could hope for considering its thematic choices, but you will definitely feel doomed. Humanity is fucked, and Mourning was doing its part to usher us along.

Not a great debut by any means, but solid and engaging enough to have built a more interesting future upon. Instead, the band changed its name to Rouwen and dropped an EP in 1997 that I haven't heard, presumably with a minor shift in style. So Greetings from Hell must stand alone, if not 'standing out' among the relatively crowded death/doom scene at the front half of the 90s, where English bands were making large strides past everyone else in recognition. Apart from the solemn pacing and soul-sucking negativity, though, I feel like this is not entirely comparable to old Paradise Lost, Anathema, or My Dying Bride. Definitely more for the Hellhammer crowd, or followers of the seminal US groups Winter and Grief. I'm not into the Japanese band Gallhammer whatsoever, but if you're down with that sound you'd also find some common ground with Mourning. Track it down, pass it around; it might even be time for a fancy limited repressing on vinyl (assuming it hasn't happened already), since these authentic 90s obscurities are all the rage right now, at least among a small population in the metal underground. I know that Vic Records reissued their 1992 split with another Dutch doom/death unknown, Eternal Solstice, and that's pretty good, so who knows!?