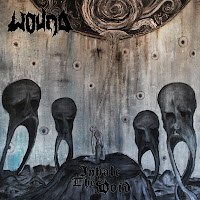 I've heard so much reverse-thinking death metal in the past half-decade that it's become like a psychological compost that I want to spread across my lawn and forget about. Having been into the 'old school' as it actually transpired, I have the same mixed feelings about this as I have had for rethrash or any other throwback sound. The distinctions really come down to 'who is not too closely ripping off band A or B, or if they ARE ripping off band A or B, are they doing it well enough to justify giving a damn?' Granted, a lot of the bands in this category are well versed in their field, competent players and capable of cultivating the archaic production necessary to really evoke the nostalgic centers of the memory, but too few are using it as a vessel towards creativity, and thus more important become the acts with the 'longer view' who break the mold (Necrovation, Tribulation, etc).

Wound of Germany are a tricky case, because while they incorporate a few more Swedish style mid-90s melodies into their picking progressions, and have a more snarled vocal presence than the ominous raucous growls one would predict, the chunky production of the guitars is definitely old hat. And, since they're not performing the most compelling riffing passages, and often fall into the typical D-beat rhythmic configuration alternated with slower rhythms accompanied by tremolo picking; without doing anything to differentiate them from the myriad others who do the same, I felt exhausted almost immediately on hearing a number of the rhythm guitars through the album. Judging by the cover art, I had half expected something more cavernous, doomed, surreal and perhaps psychedelic, but these guys definitely lose themselves quickly among the crowd. They're not exactly your run-of-the-mill knockoff of Dismember or Entombed, but clearly following that tradition, albeit with a meatier production sensibility that, like the classics, is meant to apply a crushing force to the simplistic punk-fueled chord sequences. If these were interesting or ear-drawing riffs, or great grooves, I would have no problem with their derivative nature, but after almost 40 minutes of nothing extraordinary, the cemetery-soil-churning guitar tone is just not enough.

It's fleshy, and heavy as fuck from a sheer aesthetic evaluation, but lacks the evil sounding melodies and nuance that its influences branded into the minds of this generation's graveyard custodians. The vocals are bloody, brutal, and nearly convincing, but they're just not very angry or distinguished among a huge array of similar bands. The bass guitars are loud and concussive, and the drums manage to stand their own ground even against that broadsided, enormously grimy guitar production, but too clearly the rhythm section seems doomed to its role as wingmen while the guitar scores with all the cemetery sluts. The album is bookended with a pair of instrumentals, the outro a somewhat creepy atmospheric piece with acoustic guitars and haunting flute-like tones, but the remainder of the material all sort of blends together, not only with itself but with a dozen other bands in recent memory. In the end, without Wound necessarily doing a fuck-up job of things, I just wasn't hearing anything on this debut that I haven't already come across in great quantity and greater quality elsewhere; but if you're still in the market for some of the repulsive guitars and the filth of Swedeath flag-carriers like Tormented, Revel in Flesh, Mr. Death and so forth, give it a try.