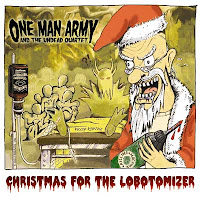 Christmas for the Lobotomizer was a limited run single released on Nuclear Blast late in 2006, presumably to bridge the gap between the Swedes' first two records for a small number of devoted fans, and keep the band on an upwards momentum into their sophomore album Error in Evolution. Had the band actually gotten somewhere, without the primary constituents eventually returning to their former groups (like The Crown and Grief of Emerald), this might have proven somewhat of a collector's item. Hell, it might anyway, but not based upon the quality of the material within, that much I can promise.

I'll be honest: I was half expecting some dorky "Jingle Bells" medley or reindeer samples, but the titular "Christmas..." is actually a straight up thrasher in line with the material on 21st Century Killing Machine, only the power of the guitar seems marginally less compact and brutal. The riffs actually aren't all that bad, easily the equal of most of the debut in durability, but at the same time neither are they (or the lead) easy to retain in the memory. Standard, uninspired modern thrash with growled vocals, plenty of bounce and thrust, but nothing even remotely compelling ever happening. Granted, there has been a dearth of 'quality' Christmas material in the metal; King Diamond obviously cleans up this category, but I can also remember a handful of others like Mental Home's "Christmas Mercy". However, in this case, the bareboned writing doesn't lend itself whatsoever to the holiday atmosphere it hints at...too bad.

The rest of the single is fleshed out by a trio of live performances from the 2006 Summer Breeze Open Air festival in Germany. Johan works up the crowd predictably, weaving in some cleaner shouts to the growls. The sound mix is far more visceral and raw than what you'd hear on the album, and in a way I actually think it lends the tunes more character, but obviously the riffs are no stronger here than they were on 21st Century Killing Machine, so I wasn't able to derive much enjoyment from this. Entirely forgettable and unnecessary.  But hey, if you're one of the few and proud One Man Army... fans, and never got to catch them on a European gig, this is probably the one place you have left to turn beyond YouTube to experience their live sound. Assuming you can find a copy, but I doubt there would be much competition when the CD turns up on an auction site.