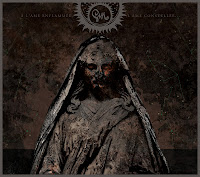 2007's Il Était une Forêt... was an album recommended to me about a dozen times, by more than one person who considered it the greatest metal recording of that particular year. But when I at last got around to hearing it I wasn't too impressed beyond that gorgeous, dirty guitar tone balanced upon the precipice between scintillating beauty and the suicidal void. At 60 minutes, there were definitely some opportunities to get lost, as well as bored, but Gris is nothing if not ambitious, so you have to take it all in stride. That ambition continues through their long anticipated follow-up, À l'Âme Enflammée, l'Äme Constellée..., which is a rather stunning turn of events towards a more richly produced palette of glimmering acoustics, uplifting folk/world music and better produced metal progressions that retain their black metal bleakness but lack the fuzz of the debut. Normally, that might prove a turnoff, since I enjoy some grit in my suffering, but with two discs and 80 minutes of material, I have to admit that this is an adventurous sophomore I easily prefer to its predecessor...

I enjoy an album where the acoustic/folk guitar sequences actually feel 'cared about', as if a great amount of effort were placed in their inception and they're not just being paraded about as a window dressing for the band's eclectic self-image, and this is clearly one of those places. Each of these compositions, whether the brighter and captivating intro to the first disc "L'Aube" or the more brooding, minimalistic "Sem" interlude, or even their placement in the longer 11+ minute centerpiece tracks, has been meticulously carved out of the wood, fields and waters of the wilderness surrounding the band, and fashioned into sometime moody or downright beautiful. Further string sections inebriate the tracks with the range and atmosphere of a fully staffed orchestra, giving the listener an impression he or she is at the symphony hall watching a conductor more than listening through a metal record, and the commonly implemented, cleaner, feminine crooning is wisely relegated to pure atmosphere, like a steady breeze above the trees that often intersects with the revelatory rush of the turbulent river waters below. In terms of pure arrangement, this is wonderful...

But À l'Âme Enflammée, l'Äme Constellée... is, after all, a metal record, and its authors pull their heads out of the clouds often enough to provide is with a crushing range of bright, searing chord progressions that intertwine fairly seamlessly with all of the vocals, drums and other instrumentation. To prove this isn't just chamber music for your grandparents, the black rasps here are drawn and quartered out to unpredictable levels of suffering, which creates an immediately bewildering contrast when they segue into some classical passage. Gris is meting out raw fucking emotion here, not the usual sort of black metal frontmanship where the inflection feels like it's monotonously being read from a page. No, Icare seems to just be staring at something and howling his lungs out in Romantic desperation, and it translates into a far less predictable performance which is instantly more compelling to experience. There are admittedly some points at which this becomes almost caricature, but that's really the point. It is only vaguely scripted agony, and he is going to wrench whatever he can out of that fleshy frame.

Are the metal components as richly realized as their surrounding arrangements? No, especially in a tune like "Dil" where the chord progressions are often rather threadbare and uninteresting, but the very fact of their existence still helps to support the record's passive/aggressive nature. The real exhilaration will almost always be felt around these parts, but it helps ground off all those electric chills you feel from the orchestration. The drums, on the other hand, are quite passionate and inspired, especially the fills in spots like "Seizième prière" where they pick up alongside the heavier chords. It's almost like the conglomeration of a rustic tribal drum circle from the Great White North fused together into a single spirit. Go forth, great arbiter of cadence! Bass lines are likewise really nice here, with a thick and plugging tone that often enough swerves away from the rhythm guitar notation to groove along with the confidence of a modern progressive rocker. But sadly the distorted guitars, while not disposable by any means, are perhaps the least compelling aspect of the music. Important in placement, to suffuse the songs with a heavy sadness, yet not incredibly melodic.

Ultimately, though, any interstices between the rapturous emotional release of Gris' ideas are more than made up for when the solemn or ethereal clean vocals, the orchestration, the percussion and the riffing all comes together in tidal bombast. It's a record of 'moments', but those are evenly balanced between its most intense crossroads and unassuming, rural breaks in the action. The interaction between shorter and longer tracks doesn't impede this Quebecois flow of creativity nearly as much as I thought it might when I first looked over the playlist. It's all consistent, at times beautiful, and at times haunting. Even where I might have become mildly bored, I can't deny that this duo put an enormous amount of care and love into what they were doing. Grandiose, but genuine. Some fans might rue the lack of grimier, wrist-cutting guitars as the dominant drive in the music, but if this was the trade-off, then I'll take it. Perfect it is not, but worth owning it most definitely is. Magnificent, really, and while it's a bit different from the other great Quebec recordings I've heard lately off Sepulchral Productions (Neige Éternelle, Monarque, etc), À l'Âme Enflammée, l'Äme Constellée... has further convinced me that this scene is about to reach critical mass... Do continue!