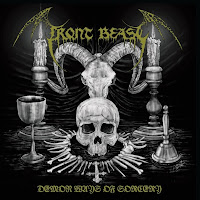 I've been a bit lazy when it comes to Front Beast, because despite Avenger's colossal catalog of demos and split appearances with this project, the only experience I've had with it in the past was Black Spells of the Damned, the sole prior full-length from 2006, and one I was certainly not that impressed with. I'm more familiar with his other bands, particularly Nocturnal, a blackened thrash act whose albums (Arrival of the Carnivore and Violent Revenge) I quite enjoy. Now, I'm sure underground European black metal pundits would cry heresy at this, and point me out to this or that split record material, but otherwise I would have no idea where to start...so instead, I'll just have at Demon Ways of Sorcery, the long anticipated Front Beast sophomore which is in many ways an improvement over its predecessor.

This is a rough sounding record which hearkens back to the turbulent front end of the 90s when black metal's vanguard was split pretty evenly between bands seeking to ramp up the genre's studio values and those who wanted to keep the music as feral and raw as possible. Naturally, Demon Ways of Sorcery sides with the latter camp, and as a result the turbulent production is likely to throw up a spiked barrier in the faces of any who want their misanthropy 'tidied up'. In a way, I'm reminded a little of Sodom, or maybe Kreator's earliest calamities like Endless Pain and Pleasure to Kill, first wave inspirations which also had a rumbling, uneven sound mix, but Avenger cranks up the bass pretty high, which creates an interesting effect against the more intricate picking sequences, especially when the guy's impetuous rasp is being panned back and forth. So there is certainly a  primitive black/thrash architecture here in pieces like "Heathen's Flame", complete with some clinical muted picking, but unlike Nocturnal, it's not a dominant factor in this music, which is so heavily imbued with the traditional Scandinavian black metal aesthetics. In particular, I hear a lot of Bathory in the mid-paced flow on tunes like "Broken Seal of White Light" or the title cut, with perhaps a little of the early 90s Mayhem due to that prevalent bass tone and several of the Scandinavian-styled chord or tremolo progressions.

Gotta say, though, that while the guitar is meting out plenty of licks, not a lot of them felt very interesting or unique, and the bulkiness of the bass and drums did hinder me somewhat from paying them much attention. A fair share of melodies are imbued directly into the rhythm cuts, and in true cult black metal tradition, lead guitars are not exactly a factor; if and when something like that appears, it's a mere wailing for effect. But to Avenger's credit, even if I wasn't thrilled by a lot of individual riffs, overall I found the Satanic sophomore appealing due to many of the flaws one might level against it. There's no escaping the pervasive sense of evil and ferocity being exacted upon the listener, and a few of the tunes like "Hidden Black Wisdom" and "Filling Skulls with Angels Blood" are genuinely catchy, by the crudest use of the definition. Sinister, animalistic and down to Earth...actually, well below Earth, like a predator stalking through the infernal chasms of the Abyss. Granted, I'm a lot more into his riffs with Nocturnal, because I'm just naturally predisposed to be a bigger fan of that aesthetic, Teutonic speed/thrash metal hybridization, but this was a few virgin sacrifices beyond Black Spells of the Damned, and a nice accompaniment to an evening of pitchfork stabbings, spent whiskey bottles and other debaucheries. Hail the Horned One, as if that needs to be said.