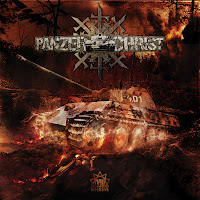 If you're familiar with American football, then you'll understand when I say that Panzerchrist have long been among death metal's linebackers: brutal, immovable, competent and dependable, but never counted upon to make the key plays in the genre. Instead, efforts like Outpost - Fort Europa and Soul Collector hovered about the midfield, beating on any takers, without ever breaking for a touchdown. A hard helmet to crack. Two decades of death metal uncompromising. Lots of 'good' albums, but not necessarily any 'great' ones. Well, The 7th Offensive doesn't entirely break out of this position on the field, but to tap further into my absurd analogy, it DOES seem like the band's beloved tank mascot is beginning to finally roll across the yards towards the enemy scoreline, with one of their more memorable records in some time now.

The key here is melody: it's never exactly been absent in their songwriting, but The 7th Offensive is loaded with tapping and other lead techniques that are being used as central atmospheric forces to drive the rhythm guitars, which are just grimy enough to grant them the composition of the blood and mud on some forsaken battlefront. The riffing bedrock isn't exactly complicated, but both the slogging, massive chord structures and the thundering kick-accompanied tremolo picking sequences are incredibly determined, smothered in blunt and hoarse gutturals with the meter of an artillery commander barking out orders to soldiers that he is fully aware are about to die; meat for the grinding machine of strife and violence. The band is a long way out from having Reno Killerich, but the beats here are fuck-solid batteries of mortar fire spewing all over the front lines, while the lung rupturing bass lines cruise along in a distorted paste that sounds like flesh being run through the treads. What The 7th Offensive sounds like to me is at long last, an evolution of the war death metal style pioneered by Bolt Thrower in the late 80s: accelerated in places, threaded with effective clinical melodies (like the bridge of "Foreign Fields") and stylized with gruff vocal effects.

Remarkably, just like Regiment Ragnarok two years ago, this is being performed with an almost entirely new lineup, the one exception being the bassist/morale officer Michael 'Panzergeneral' Enevoldsen, who just sounds fantastic here with both his bass lines and the mild use of synthesizers to flesh out the gruesome and convincing atmosphere of each sortie. This fresh infusion of blood and talent has obviously made a huge difference in the group's sound, without abandoning the core military concepts and brutal bombardment aesthetics that have made Panzerchrist one of the most consistent, long running names in Danish death. The leads here add an unexpected sense of elegance to the crushing momentum of the rhythm section, and thus I felt more of a stark but effective contrast between the beauty and ugliness of the songs than I remember off most of the older discs. There isn't a whole lot of variation between the riffing progressions, with 3-4 motifs (usually mid-paced) dominating the 40 minute experience, but at the same time its incredibly consistent and steady. You do NOT wanna get tackled by this beast, because all that will remain is bone dust and flakes of skin...not enough for identification without a DNA kit. Very good stuff here, which I can easily and heartily recommend to fans of Bolt Thrower, Hail of Bullets, Jungle Rot, Invasion and other noted death metal warmongers.