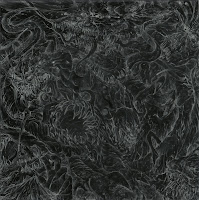 I actually had a few people recommend Germany's Beyond to me in leading up to this promo, with promises that they were helping to force wide the boundaries of extremity wherein this substantial wave of death metal nostalgia thrives. Having now had my brain caved in by Fatal Power of Death about a half dozen times, I would have to say that I'm not disappointed in what I'm hearing. Sure, the music here is clearly another hearkening back to the waters of death metal 'innocence' that so many are currently drinking from, but the sheer ferocity of the blasting, the grimy and often confusing guitar passages that alternate back and forth with the more accessible, grimy grooves, monstrous production and resonant, echoed vocal barks all add up to a dynamic, stirring necrotic tornado of a debut record that is very easily one of the most exciting and memorable pupils in a class that includes Cerekloth, Vorum and Zealotry. Perfect it isn't, but beautiful it is...that is, if in your mind, beauty is a congested void of extraworldly nightmares glaring their maws and tentacles in recognition of your imminent fucking demise!

All the usual suspects like Morbid Angel and Incantation can be heard as a loose foundation of riffing sediment, but the raw speed and savagery evoked throughout this record also strikes notes of war metal bands like Revenge, Angelcorpse and Blasphemy, like the hyperactive sibling of another Iron Bonehead band: Ireland's Zom. The riffs fly all over the place, from layman muted thrash patterns that erupt from the dissolute darkness hovering above the instruments, to cyclones of Altars of Madness complexity and then head-spinning, nail-biting floods of tremolo picked chords so fast and forceful that they blend into sheer sonic battering rams. Add to that the exciting, schizoid bursts of melody and traditional speed picking patterns that would do bands like Slayer or Rigor Mortis proud, and Beyond prove nothing less than a living cyclone. Of course, they can also slow things to a brooding, crushing pace as in "Definite Decease (in the Chamber of Deathsalvation)" where the massive, chunky chords slowly roast the listener as if he/she were at an Elder Gods' weekend barbecue and about to be served up with their own drained bodily fluids as marination...

This is just one of those records that you come away from scarred, feeling sick and as if you've gotten the glimpse of something no mortal should ever see. But at the same time, Beyond incorporate so much of the desperately needed variation and creativity to their riffing that it's also highly musical. Fatal Power of Death is no mere, dissonant disjunction of a death metal record, but a twisted palette of grotesque colors from which a Promethean passion stirs. Note progressions are moody, menacing, and at times meticulously precise in nature, so the compositions are constantly in a flux of order and entropy. Dark vocals bark out over the gruesome throng of guitars like a flying three-way chest-bump between Chris Reifert, Dave Vincent and Pete Helkamp, and the drums are so goddamn amazing that you just want to give up your own sticks, close the garage door behind you and never return. Imagine if Hoglan and Sandoval were mutated together into some flailing percussion-hydra and you've got a good idea of where this is going. They've even got an ambient component in the 13 minute behemoth/finale "Consuming Black Void". All in all, this is a devastating triumph of a full-length debut with considerable replay value. Just make sure your will is up to date before you decide to take this plunge.