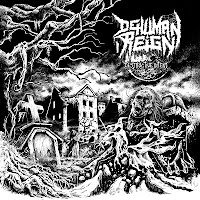 Though the cover artwork definitely seemed to hint at being either an Autopsy, Incantation or Entombed derivative-of-the-week, I really have to give Germans Dehuman Reign some credit: Destructive Intent is a sampling of intense, thundering traditional brutality that takes its cues from faster-based including the Polish onslaught of bands like Behemoth and Vader, the Floridian frenzy of Morbid Angel, Hate Eternal, Deicide and Malevolent Creation, and perhaps a healthy helping of Krisiun, Suffocation and Immolation on top. It's 'old school' along some vectors of its execution, but thankfully not in the same way as most other new death metal signings I've heard the past few years. These guys play with all the precision and potential of the more technical side of modern death metal, only they've trussed up their pinpoint musicianship within rhythmic and melodic parameters that so defined the emergent extremity of the 90s.

Speed is the rule, and slower or mid-paced material the exception, especially once you've crossed the mournful harmonic crescent of the intro "Prelude to Perdition". I can't promise a lot of originality in the riffing cycles, since they've already been played out for so long, but the Berliners manage to transform it into something exciting and punchy, and they do with a nice, clear sheen of production through which you can make out all the details in the guitars. Blasting, fills and foot-work are the human embodiment of a storm, and the guitars often erupt into these mischievous, excellent picking structures like the bridge of "Extinction Machine" where you feel like, in the midst of this torrential slaughter, a band of gleeful imps were dancing on your spine. Hell, once in awhile I even caught a bit of that Malleus Maleficarum-era Pestilence surgical riff style, and you know how I feel about that! Vocals are delivered with a guttural honesty emphasized with a gritty low end rumble when he sustains some of the lower barks, with some impetuous snarling circa classic Deicide to round it all out. The leads in tracks like "Irreversible Soul Consumption" are great, they even go so far to make sure the rhythm guitars beneath the solos are catchy, the mark of really giving a damn!

And because Dehuman Reign gives a damn, so do I. Don't get me wrong, I enjoy a great deal of this morbid, suffocating, atmospheric raw death metal that is all the rage nowadays, but Destructive Intent lives up to its name in reminding us that the genre need not skulk about in the caverns and sepulchers for all time to stay 'legit'. No, it's also capable of bringing online enough artillery to level a major city, and even if the actual leaning of the songwriting here is nothing novel, they're tearing out some of the most invigorating and apocalyptic tremolo picking patterns I've heard all year. The two 'Invocation' dark ambient interludes with the down-pitched ritualistic spoken word might seem a fraction cheesy, but they actually do provide a breather before each of the ensuing cataclysms, so they're a welcome enough addition. Ultimately, while this isn't the catchiest death I've heard lately, the intensity, conviction and production of this mini-album provide plenty enough thrills for those who want their death metal fast, clean, brutal and nihilistic.