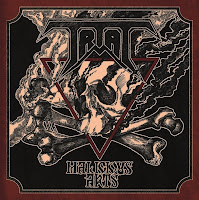 Trial is another of the occult heavy metal revivalists hailing from a Swedish scene which includes Portrait, In Solitude, Enforcer and, more loosely, Ghost, who have gone on to become somewhat of a phenom. Their full-length debut, The Primordial Temple was a respectable effort which probably didn't reap quite the attention it deserved, but with luck that will change with what is frankly a fantastic EP follow-up out through Nuclear Winter records. Malicious Arts is little more than a two track sampling of the Swedes' capabilities, but the classic infusion of Swedish, Danish, NWOBHM and even some USPM elements is impressive even in the span of 12 minutes. What if I told you Trial was like a successful hybrid of early Helstar, Candlemass and Mercyful Fate? Horny yet?

The tunes here have more of an 80s power metal undercurrent driving them along, redolent of the melodic and busy riffing you'd expect on the formative works of Liege Lord, Lizzy Borden, Fates Warning and of course Helstar. Nothing indulgently complex, but neither are the chord selections and faster, intricate picked runs splayed out in the more predictable patterns that hold back a lot of comparable acts who would build them up towards garden variety choruses. The choices here seem fresh, compelling and atmospheric as they're woven into a support matrix for Linus Johansson's crystalline vocalizations. Trial also earns points for the plunky bass playing: it'll occasionally get drowned by a denser rhythm guitar progression, granted, but its capable and interesting, with lines like a seamless blend of Steve Harris and Sharlee D'Angelo. Add to that a very functional, organic drum mix which is fully audible against the guitars, and there are no major gripes with the production, but in true 80s fashion, Linus' voice is easily the center of attention...

Which makes sense, really, because the guy has a dramatic presentation which I could only compare to James Rivera if he were imbued with hints of John Archs' dramatic fluctuations circa Awaken the Guardian, and a few operatic whiffs of Messiah Marcolin. Maybe even some Eric Adams in there somewhere. Linus will tear out a decent, level scream in an upper register, but still delivers plenty of bite on the lower, verse passages, and as a result you definitely get that edge of cruelty so vital to a lot of legendary 80s works. I also really enjoyed the eerie choral arrangements, like the intro of "To Dust", which are responsible for an added sheen of ritualistic completeness that reek of ancient sorcery behind locked dungeon/tower doors. I wouldn't say that these tunes were the stickiest of their ilk that I've heard this year, especially when compared against the latest efforts of Satan, Warlord and Attacker, but they certainly have whet my appetite for the inevitable Trial sophomore album. If it has the same consistency and quality I'm hearing on this material, then hot damn...