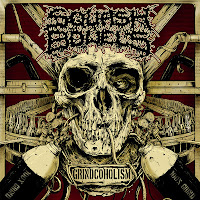 Poland's Squash Bowels have been grinding away since 1994, but in that nearly 20 year period I've only come across their music a few times and probably dismissed it for many of the qualities that usually turn me off from the style: average riffing patterns derived from punk, hardcore, and veteran grind (Napalm Death, Terrorizer, Carcass, etc) set to blast beats, with little distinction or character beyond 1-2 minutes of sheer muscular release. That said, if Grindcoholism is anything to measure progress by, then I feel like they've come quite close to mastering that style and even throw a few compelling riffs in out of left field that help round out the experience. It's definitely got that European slant to the production, with the heavily saturated guitar tone to herald the crushing d-beat grooves, and it lacks some of the dissonant innovation present in another, comparable Polish group, Antigama, but hearing the record come out your speakers is admittedly like holding your ears up to a meat grinder...

Soaked. Fleshy. Brutal. The references I'm hearing most are Nasum and Regurgitate, only with less direct spurts of death metal influence, but beyond that, you're getting a lot of down-tuned chord intervals that reek of the old British stuff in the later 80s...not only the obvious, but some of the note progressions even remind me of a Godflesh if you were to drop the industrial programming and hire on an actual drummer for support. Blasting is the go-to as far as tempo, but outside of those sequences they incorporate punk propulsion, loud and crunching death/thrash riffs and mid-paced double-bass demolition-grind. A lot of individual sections of the album do come across as samey, but there's plenty enough variation to round out 32 minutes, and to give Squash Bowels further credit, they keep their songs substantial enough in duration that you don't feel like the rug is being pulled out from your feet just when a groove or burst is becoming interesting. Vocally they mete out a mixture of traditional Greenway grunts and a splash of the Walker/Steer guttural/snarl mating, but once in awhile the growls get deeper and more pronounced so they give off an aroma of brutal death, and even some toilet flush enunciation like in the title cut.

The drums sound excellent, a rich and pounding palette across which you can also hear the cymbals and hi hat with due clarity; and the bass guitar is swarthy and damp like an overstuffed sewer pipe, giving a lot of that callous industrialized swill and depth to the chord patterns being splayed out above. But it's really the rhythm guitar which stands out the most here, since it's just so fatty and juicy that it soaks through like the listener's ears like the bloodiest of steaks on a paper towel. Granted, I wished for more dissonance here, and more of the atmospheric streaks of noisy feedback that are often hurtled across the gut churning chords. The riffs, while bright and brutal enough to compensate for their simplistic nature, just aren't all that compelling outside of the overall savage context in which Squash Bowels perform. Grindcoholism is not an album without some level of competency, as these guys are old hands in the field, but its a bit too purist for its own good, and doesn't leave much of a lasting taste once the dust clears and your entrails have been stomped and flattened. Which is, for some of the medium's audience, more than enough, especially those into the Swedish acts I mentioned earlier. The excellent, abrasive production and intense drumming are nothing to scoff at, but musically I was left with no enduring impressions beyond the visceral.