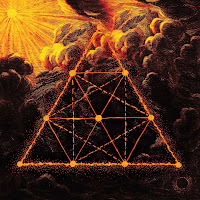 Based solely upon my experience with their last EP, Consociatio Solis et Lunae in 2011, I was half expecting the latest Pantheon of Blood to emit another brooding monolith of darkness, snuffing out the summer sun like it were just another candle on the mantle. Instead, the Finns have surprised me with a more melodic, traditional black metal selection that possesses an altogether warmer disposition than I would have predicted. It's not necessarily that these elements were absent on the older material, and when I say 'warm' I don't mean this is friendly or happy sounding, but Tetrasomia functions due to a bedrock of studied melodicism that creates a rapturous contrast against the fundamental harshness of the black metal vocals and majestic if traditional flow of chords.

Speaking of vocals, they're quite effective here, with a ghastly mix of rapacious genre snarls and some blunter barks that complement one another rather well, occasionally using an even more grotesque, sustained guttural (as in "Monta Maailmaa Nähnyt") which resonates hauntingly over the more uplifting melody beneath. The guitar techniques here are nothing out of the ordinary for this style, but I think the way they mix the rhythm tracks to split them on the stereo/headphones is quite good, with a muddier tone conjoined to the knife-like tremolo picking that can often border on hypnosis (especially on the closer "I.N.R.I."). They're also unafraid to induce a folksy clean guitar (again, in "Monta...") or support a distorted progression with some cleaner picking so that the music roils with variety and atmosphere. Bass isn't too heavy in the mix, and it might be better if it were, but you can hear a few distinct grooves and swells that separate themselves from the tinnier guitar lines. Drums are clappy and thundering where appropriate, giving the production an even more 'live' and natural appeal to it that doesn't rely on a mechanized finish. All part and parcel to the emotional and philosophical wilderness of the compositions.

Basically, Tetrasomia is raw without becoming unassailable, reminiscent of certain records by Darkthrone or Horna where they also relied heavily upon dirtier heavy metal riffs and melodies, and no doubt some of the vocals recall Shatraug or Nocturno Culto. The note choices aren't exactly ingenious or immortally memorable, but instead textured and rustic and honest to a fault. Much of the pervasive 'evil' here is left strictly to the vocals. This is not obscenely polished music, and the little inequalities between guitar tracks, vocals and beats give it a real connection to the listener who opposes modernization, and values the core aesthetics of black or even folkish black metal. Mysticism is manifest strictly through attention to the note patterns and the suffering of the vocals, without a massive backdrop of ambient effects or synthesizers to guide one into the subconscious. Ultimately, I wouldn't say it was better or worse than the last EP, just a little different. A marginal reinvention, but Tetrasomia is a successful one, and Pantheon of Blood are obviously not interested in flogging a dead horse. Well worth hearing if you're into primal Finnish sound sculptures of Blood Red Fog, Vitsaus, Horna or Mortualia; or rustic, roots European black metal in general.