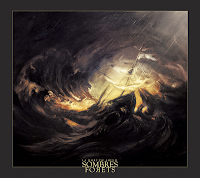 Continuing Sepulchral Productions' gold rush of 2013 is the third full length effort from Quebec's Sombres Forêts ('Dark Forests'), not to be mistaken for Calgary's Dark Forest, which performs more of a pagan, structured form of black metal. But don't let that statement mislead you into thinking that La Mort du Soleil is somehow loose at the seams, for this is an extremely atmospheric experience which revels in its ambient textures just as much as its harsher content. Equal parts ghastly and gentle, Annatar's writing really gives the cover artwork some context, because the listener is made to feel as if he/she is deep at sea on some battered old vessel, where periods of tranquil, sun-flecked skies are ruptured by torrential rains and choppy, terrifying waves. Not the sort of record you'd seek out if you just wanted something sinister to sear your face off, but if you've got the better part of an hour to kill by the docks with a bottle of your favorite poison and a whole lotta problems weighing in on your mind, well this is sort of like a surreal soundtrack to Old Man of the Sea if it had been penned by Varg Vikernes and not Hemingway...

Lots of pianos, wistful and dreamy acoustic guitars, ambient feeds and varied vocal arrangements strewn about its seascape; an ocean of heirlooms and objects, each connected to some sorrow or regret, cast out to drown but never fully submerged. From the simplest pieces, like "Effrondrement" which is more or less a rolling piano piece with some slightly creepy, distant vocal harmonies; to the more calamitous epics such as "Brumes" or "La Disparition", Annatar is nothing if not tonally passive/aggressive. Ebb and flow, low to high tide and back again, you haven't always got a lot of warning before the raw, abrasive guitars drench the scene with a tone quite familiar to the fans of depressive or suicidal hemisphere of black metal. We're not talking full-bodied, complex riffing patterns, or even rhythm progressions that would stand to scrutiny if separated from everything else, but more of a sizzling accompaniment that erupts almost like a post rock swell, when the emotional floodgates are torn from their hinges. In this, it's not entirely different than Annatar's Miserere Luminis collaborators Gris on their new double-album, but on the other hand, the acoustic guitars at least are a bit more on the subtle side (like in "L'Éther), not meant to shine entirely by themselves.

Drumming patterns range from the tribal and meditative (like the beautiful bridge in "La Disparition") to splashy explosions during the heavier sections, but while the snare pops straight through, the balance between the vocals and other instruments is such that I often felt like some of the cymbals were reduced to a bit of a hiss when the guitars are crashing along. Not an issue where the music becomes less dense and cacophonous, though. Bass guitar lines are pretty simple and often seem to disappear altogether, but they definitely cultivate a lowly grooving blackgaze sensation when they matter the most ("Étrangleurs de Soleils") and this is not the sort of sound where it's often an important component. As for Annatar's vocals, I cannot say that they're the most unique sort of rasp out there; he delivers a lot of sustained lines that fit the sheer expansiveness of the music, but you might not be able to always pick him out of a lineup of similar snarlers. To make up for that, though, La Mort du Soleil is heavily saturated with ethereal, dreary or even ringing clean vocals which are often so subtly infused to the other instruments that you feel like that forsaken sailor I hinted at earlier; slowly losing your grip on reality. Are those the voices of angels as you approach the afterlife? Sirens singing you into the depths and their bellies? Or rescuers over the next angry wave-crest...

...whatever the answer, they really contribute so much to the impression Sombres Forêts leaves upon your spirit, and similar to Gris, show an enhanced sense of composition which does not solely hinge on riffing alone. Annatar is a composer first, and though he chooses to express himself partly through the grim savagery of the black metal medium, he is by no means restricted to its parameters. Or, rather, he reminds us that there ARE no parameters, no boundaries, and to leave such follies drowning behind you. You cannot defy conformity through conformity, after all, and that's why it's so great to hear artists like these in the Quebecois scene who create such texture-heavy musical 'retreats' into the wilderness. La Mort du Soleil is further evidence that this particular scene is helping to lead the charge away from banality into rapture, and I, for one, enjoyed it even more than Annatar's previous outings with this project. Highly recommended to fans of Gris, Forteresse, Neige et Noirceur, Sorcier des Glaces, and Lustre, though for most of those it goes without saying.