One Man Army and the Undead Quartet - Error in Evolution (2007) 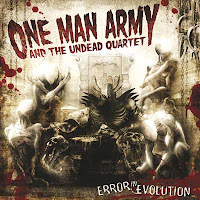 While Error in Evolution develops a set of problems all its own (hell, the title even implies such), and I was hesitant to even check this out after so mild a reaction to the debut album, One Man Army and the Undead Quartet at least came off to me as entertaining here. As meek and primitive as some of the techniques were, and despite an obvious intention to implement cleaner, emotional vocals (which were sparse on 21st Century Killing Machine), there's an appreciable integration of melody into the chugging rhythm guitars. Most importantly, a few of the chorus sequences on this album actually stand out, whereas last time the best you'd get was some growling over a boring riff that was presumably supposed to be the most intense in that given song...

I think it's clear that a bit of Swedish melodeath influence crept in here in both the muscular momentum of the more traditional picking patterns, not to mention the dime a dozen melodies that break out in tunes like "Heaven Knows No Pain" or "Knights in Satan's Service" (an offhanded KISS tribute?!?) which you could find on any random clone of Dark Tranquillity or early In Flames. There's also a lot more jubilation in the lyrical/vocal construction and the pacing, which seems to be faster than the debut without going to extremes. A track like "The Supreme Butcher" almost seems like post-Exodus party thrash, where "Mine for the Taking" goes straight for the chorus and a great bridge. Much of the punctuality in the riffing reminds me of Children of Bodom, only without the ceaseless added level of noodling leads and synthesizers (if that makes sense). Lindstrand is definitely trying to stretch his pipes with some whinier clean vocals, developing a charisma somewhere between Anders Fridén's modern vulnerability and Alexi Laiho's rapaciousness, and then supporting this with his own blunt guttural force.

The peppiness of the drumming and pump of the bass from the first album both return here, but this time out I definitely felt a greater punch to the stomach when listening to the constant chugging, which helped ramp up my own enthusiasm. Rhythm guitar riffs are still largely bland and derivative, but the small choices being made in there are more pleasing to the ear, and they actually load up some slightly technical fills in tunes like "The Sun Never Shines". A few of the 'jump da fuc up' style progressions can seem distracting, but they actually conjure some interesting things with them where they integrate them in "See Them Burn" against the multiple vocal styles and the slower paced melodies. One track, the straight up metal anthem "He's Back (The Man Behind the Mask)", seems like it was meant to retroactively score some long forgotten 80s slasher gem, but the accented chorus melody might prove too cheesy to stomach for a number of listeners who just fucking hate everything Swedish post-Somberlain anyway. It IS an Alice Cooper cover, in their defense.

No doubt Error in Evolution would prove groan-inducing to that same crowd, and some fans of the debut might also not have appreciated its playfulness, since the band seems not to take itself so seriously. There's also no doubt that One Man Army and the Undead Quartet were aiming at a more pedestrian, everyman spin on the melodic death/thrash niche (comparable with The Haunted, or a clowny late 90s In Flames), while peers like Darkane were taking it into a more interesting, technical and dystopian direction. Naturally, the latter was more my style, but I walked out of this record with at least a fraction of amusement, while I can't remember even cracking a smile at 21st Century Killing Machine. Goofy, crowd pleasing, and self-consciously idiotic in places, Error in Evolution is not exactly a 'good' album, but it taught me that Lindstrand's new vehicle might have been capable of writing one.