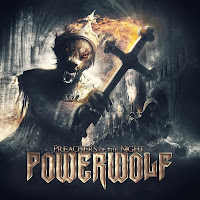 The pseudo-Transylvanian answer to Manowar, Powerwolf elicits both admiration from the heavy metal fan who learns not to take their schtick too seriously, and ire from the heavy metal fan who does not. They've always run the risk of a paper-thin gimmick wearing out its welcome, a sacrilegious and horror-inspired lyrical pool, puns in titles and choruses that have become almost idiosyncratic to the band itself, and the goofy corpse paint thing which might not look nearly as threatening on these Germans as it would on Marduk. But, so what? I'm not about to kick my Alice Cooper, KISS and King Diamond records to the curb for initiating these theatrics, because when it comes down to it: I am not ashamed to be a Powerwolf fan. This is a band who I rely upon not only for the tongue-in-cheek themes in their music, but also for some goddamn fun. Big Euro heavy metal riffs, organs and atmospherics that set up an appropriately cheesy haunted house/cathedral atmosphere, and chest-beating, mildly operatic Attila Dorn vocals which create instant synaptic triggers in my brain that make me want to return to their songs again and again...fuck, Lupus Dei is STILL in my car. I need to get it out of there before it melts!

Now, having said all that and fallen prostrate before Powerwolf, I felt that their last effort, 2011's Blood of the Saints, was beginning to run low on ideas, and certainly starting to follow its own tracks through the forest a little too closely. Granted, a lot of other European power or trad metal acts could be accused of the same flaw, putting out the same album, repeatedly, ad infinitum, but with Powerwolf, the problem is that Attila's vocal melodies are so crucial to the quality of the songs that redundant note progressions can cripple the compositions for anyone already versed in the older albums. This is why they peaked in 2007, with a record that myself and many of my friends would constantly sing along and air-organ to...it was completely fresh, unexpected (except to the handful of people who heard the debut), and hilarious. The first and third efforts were comparable if less catchy, but by the time Blood of the Saints arrived, the pack had grown weary with little new game to hunt, all groomed up and ready for a kill, but no prey in sight. A decent album, surely, but entertaining song titles and exquisite cover artwork (which this record and the last both have) can only get you so far, the tracks themselves have to continuously beat themselves into the madhouse of your brain and lock themselves in its basement asylum...

That leads us to Preachers of the Night, which arrived with the pomp and gusto of both a lead-in single and EP featuring "Amen & Attack", a reasonably engaging tune fueled by a decent, sweeping chorus that feels almost like it belongs in a Gothic, lycanthropic spaghetti western, and some thundering, staccato picked guitars supporting the rampant synthesizers. Okay, I'll bite, since it's just as good as anything off the previous disc, at the very least. Sadly, though, Dorn's vocals are just drawing upon the same bag of tricks here that make most of the chorus sequences on the record feel like slightly altered phrasings on lines he has used in the past. Clearly, this guy has a range, so why isn't he using it more? I would not at all be opposed to hearing him base some verses around other, less grandiose scales, more discordant progressions, or go somewhere unexpected like hovering in his lower register for an entire track. There is this sense here that Powerwolf is not challenging themselves whatsoever, resting upon its blood-dripping rosary beads, and though they make an earnest attempt through the musicianship and writing to provide a few nail-biters, they simply open up too many of these tracks with the same bastardized "Carmina Burana" by way of Richard Wagner and the Therion orchestra...

Too obvious, guys, really, playing it safe. One might assume that by record #5, the comfort zone would become restrictive and uncomfortable, thus warranting some further experimentation, but this has not proven the case. I suppose that, from a musical standpoint, they have grown to encompass a slightly broader range to the structure of the guitars; for instance, the harmony initiating "Sacred & Wild" felt new, and tunes like "Secrets of the Sacristy" feel like Powerwolf is encompassing an anthemic Gamma Ray/Freedom Call sensibility with busier, more acrobatic guitar lines, but then the 'hallelujah' vocals just drag you back into the limited palette of diminishing returns, so it's all reduced to standard power metal with the one caveat being the operatic vocalist. And that's really how I'd describe it to a newcomer: dramatic power obsessed with idealistic, stereotypical Gothic horror. The Vision Bleak gone Sabaton. It could be far worse, of course, they could slinging about the usual, generic uplifting power metal buzzwords like 'eternity' and 'destiny', 'wings of _ _ _ _ _', 'glory' dosed liberally with self-referential discussions of how metal they are, but evil churches, fallen saints, vampires and werewolves can also grow tired after a spell.

I do like that they've got a song ("Nochnoi Dozor") which I believe is based on the modern Russian horror novel and film of the same name; and that they also do a number ("Kreuzfeuer") in their native tongue. The latter is a pensive storm with a lot of warlike drumming which builds to the inevitable climax in which one realizes that Powerwolf sounds pretty damn good in German, and also the most unique sounding track of the lot. You can always tell that they put a lot of effort into the production and arrangements, but their minds are too often driven by the predictable climaxes of theater and opera, so they're hardly the modern equivalent to Queen (even if they obviously have listened to them). Some will find the very brickwalled, clean and potent guitar tone and drums a bit too perfect for their liking, and I can't say I entirely disagree. Perhaps this is one of the ways the Germans could experiment in the future...a rougher, grainier guitar tone and more of an occult, psychedelic horror vibe with less overt organs, but keeping the same humor in the lyrics. This would also allow Attila more room to play around with his vocals in an intimate setting.

Ultimately, though, Preachers of the Night is more of the same we got on the last album, without any large, discernible rise or dip in songwriting or tonal quality, though this might be a fraction more bombastic and effective if I were to make a direct comparison track by track. I was actually disappointed to find that it was quite a lot less humorous than their earliest outings...the lyrics deal more with a conceptual, alternate historical takeover of the Catholic church by wolf-men. Not a bad idea, but if you're expecting the joy of "Saturday Satan", you're out of luck. That aside, if you really loved the previous two outings and merely want more of the same, then you'll probably devour this one, but I admit to growing wary of the same repeated spectacle year in and year out. It speaks...err...howls volumes to me that the songs on Lupus Dei still blow away anything that has come since, and back then the production felt even cleaner and louder, a little less compacted by the over the top symphonics and vocal arrangements. In their defense, they've put too much care and effort into this record to be anything less than 'good', but it really walks...err...stalks the border between success and mediocrity. Stagnation imminent, if not immediate: if you can teach an old dog new tricks, can the same be said for a wolf? I hope Attila Dorn and crew answer this the next time they venture out into the moonlight.

Verdict: Win [7/10] (the resurrection of the carnivore)