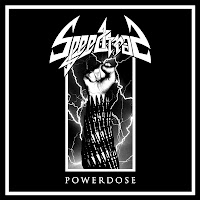 'So what exactly is speed metal?' It's a question I've heard a hundred times, striving for an answer that would likely deviate a dozen times from a dozen sources. When I was young, I remember the label being applied to bands like Venom and Motörhead, bands which, unsurprisingly, also wore a lot of other tags (and continue to do so). Then it was on to acts like Metallica and Megadeth, who wrote more sophisticated material, and then later yet it was conflated and conjoined with various acts in the fields of American and European power metal. Semantically, I'm sure there are numerous camps who would argue insignificant details back and forth with no clear winner, but though I often throw the term around myself when describing a band's sound, I will not attempt to do so here.

That said, if one was to picture some sort of idealized, Romantic notion of what a 'speed metal' record was to sound like, then 9 out of 10 times we might end up with something like Powerdose. Vicious, dirty hi octane rock & roll which burns up the dragway faster than you yank off your tanktop to flash the racers your chest (male or female). Punk-like chord progressions accelerated to even more exciting levels of abuse. A few of you might recall Speedtrap's Raw Deal EP, which generated a little buzz back in 2009-2010, likely due to the cover art as much as anything else; a clear nod in tribute to Exciter's seminal Heavy Metal Maniac, but attempting to up the ante by bringing a chainsaw to a knife fight. Well played, Finns, and then again, so was the music, though it was nothing particularly memorable other than some possible signification that we were about to experience a full-on SPEED METAL outbreak. Well, that sort of happened, and sort of didn't...we got bands like Enforcer out of the deal, who practice a more melodic variety with thrash and primal power metal influences, but most excelling in this niche were doing so with an overt black metal influence tracing back to Slayer, Sodom, Venom and Kreator.

Powerdose is nothing of the sort, really: this is an unadulterated, ridiculous, frenetic accumulation of the inspirations I hinted at earlier. Rapid fire road-licks that would make Dave Mustaine salivate, enveloped in the road-hardy attitude we normally associate with a band like Exciter or Motörhead, showing up to the club swathed in leather, sweating up the stage, bumming a cigarette off you before stealing your girl and hitting the highway once more. The bastard child between Satan and the old Looney Tunes Roadrunner character. Maniacal, blues-based riffing patterns and self-indulgent squeals supported by lighting powered snares and toms. A front fiend who alternates between some frivolous, charismatic screams redolent of Exciter, and a meaner mid range, both of which mildly reveal his natural accent. Pummeling strums of the bass guitar that are every bit as energetic as the rhythm tracks, if not often deviating enough that they become interesting. And a vivacious, loud-as-balls production here through which you can hear everything, easily trumping the Raw Deal EP in intense, brick-to-the-face action.

To be honest, I wasn't expecting a lot of variety here, and through about half the cuts, they just race along with abandon, content to leave the listener huffing their dust...but then, you've got some breaks in the action like "Out of Time, Out of Line" where the beats are more of a mid-paced neck-strainer and the vocals seem to hover in the higher range, or "Battle Cry", which bears more of an epic USPM/speed aesthetic reminding me of older Liege Lord or Omen. All the tracks are well performed, and true to its central motivation, the album is over in just under a half hour. Within that span, though, I can't say that a lot of the songs were really so catchy. The riffing is more about legitimacy to the music's roots, and having a good time, rather than building strong melodies or sinister sounding picking patterns. It's a functional, frenzied Summer record spin. Higher speed dirt than "High Speed Dirt", for sure, and well suited to induce partying amongst the leather bound legions it likely targets. But beyond the nostalgia and ravishing production, the proof of concept (by Jove, they've got it right!), and the fact that I enjoyed this more than Raw Deal, it doesn't leave a terribly massive impression beyond a dozen or so spent beer cans by the roadside, and the skid marks on your SPEED METAL soul, whatever that means to you.