Humiliation - Turbulence from the Deep (2013) 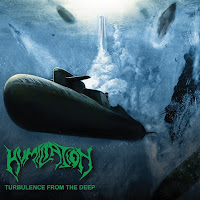 War metal seems somehow an appropriate thing to cover this Fourth of July, even if that war metal is hailing from one of two Southeast Asian acts writing and performing under the banner of Humiliation. Not to be confused with the Indonesian band, who dabble in a more brutal style of death metal, this Malaysian quintet have cultivated a particular obsession with the classic sounds of the late 80s and early 90s, in particular groups like Bolt Thrower, Gorefest, Cancer and Asphyx, known for their plodding simplicity among the ever-sickening sea of complexity that progressed through the 90s and beyond. But we've come full circle, as younger bands pillage the past for more authentic tones, returning to the roots and attempting to expand more freshly in a horizontal direction.

The whole concept behind Turbulence from the Deep is compelling to me. Submarine death metal from Malaysia? Sign me up. Surprisingly, though I can't recall encountering them in the past, they've already put out three full-lengths, each represented with an aircraft, vessel and mobile armor, so the theme is nothing new to the guys. Not that it's new anywhere, because beyond Bolt Thrower, groups like Hail of Bullets and Invasion have been champion this style of 'History Channel' death metal for some time, but the prospect of this outfit's geographical location hints at a fresh perspective. And that might or might not be the case, since I haven't got the lyric sheet for this one, but I can say for certain that the music is a time portal opened back up to the years of War Master and The IVth Crusade, centered on a set of hooks that unfortunately are so primal and obvious that they feel ceaselessly derivative across the 44 minutes of material. Now, that might not be such a negative if you're the sort of listener who pines for nostalgia at the expense of innovation, but I could not in good conscience get past the fact.

That is NOT to say the minimalistic riffing killed of tracks like "Operation Obeo One" or "Calibrated Chaos", which slogs along at almost a death/doom crawl, is a total deal breaker, because what they lack in creativity they make up for in a very rich, pummeling, brooding production peppered with somber melodies in the vein of Bolt Thrower. You can only imagine that with such a limited palette of chugging rhythm guitars played out over only a few chords and root notes, this helps add some versatility, depth and emotion to the bleakness. The vocals are a truly nihilistic guttural bark, using the Karl Willetts style as a base, but not as beefy, so you hit a few more mid-ranged growls here or there. The drums snap along persistently beneath the meat of the rhythm guitar, with plenty of double bass rolls when called for, and they pick up appropriately whenever Humiliation surges forward into one of its faster death/thrash styled riffing sequences. Bass guitar is heard and felt, but it doesn't exactly have the consistency of a depth charge that I had hoped, and it tends to find comfort in following along the rhythm guitar patterns. Admittedly, a lot of the death metal I receive from this area of the world is usually quite brutal and choppily engineered, so Humiliation was at least a smooth change of pace.

Songwriting is all pretty steady and samey through the first ten cuts, with some deviations in tempo that prevent it from becoming a swollen bore, but then they throw a surprise left with the tranquil acoustic outro "Submerged at the Seabed" which is pleasant and captivating despite its own simplistic nature. Otherwise, the parameters are set early on and there's little to no deviation. The notion of lead guitars are generally just reduced to those melodies I mentioned earlier; an area where the band could clearly expand upon, even just with some bluesy wailing an an effects pedal. Atmospherically, I suppose the drudging pace and doomed tone of the rhythm guitars is actually enough to make one feel as if he/she were sinking among spent the artillery shells, shrapnel and corpses after a hull breach, but it wouldn't have hurt to indulge in some sonar, watery effects or even samples and help emphasize the concept. Which is in of itself an interesting one, and one that Humiliation should continue to explore, only using a more creative set of guitar riffs. As it stands, Turbulence from the Deep just anchors itself among its influences and plays it too close to the ammo-belt. Decent stuff, for sure, but ultimately not so interesting as I had hoped.