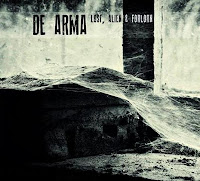 Providing the DNA evidence that a missing link exists between The Moody Blues, The Cult, Pink Floyd, and Katatonia, this is a Swedish/English collaboration between vocalist F. Allain of Fen, drummer J. Marklund of Sorgeldom and multi-instrumentalist A. Petterson of Lönndom, the last two having worked together numerous times before in projects like Stilla, Whirling and LIK, all of which are pretty interesting in their own right. To some extent, Lost, Alien & Forlorn suffers from a case of repetition and sameness which can grow tiresome after a few listens, but as a seed for something more creative down the line, it certainly got in a few shots of unbridled emotion and an almost numbing sense of bliss.

Basically this is driving, highly melodic doom metal (late 90s Katatonia, Daylight Dies, Rapture, etc) with a few black metal chord textures and rasped off-vocals that place it loosely into hybrid territory. The difference is that F. Allain is resurrecting that same swath of psychedelic terrain that a lot of dreamy British rockers explored in the 60s and 70s, and suffice to say yours truly does not encounter such a mixture every day. The chord progressions here are fairly commonplace, but layered so that the flow of the chords is almost always accompanied by some brighter notation, delivered either through a dissonant higher pitched chord or a sorrowful little melody. Hints of Fen, Sorgeldom and Whirling are clearly present, but I'd say this was an altogether different beast than the constituents' mainstays, though I felt that musically it did not break a lot of new ground. For one, the chord selections are hit or miss. They're always busy and emotional, but whether they tread a series of unbroken chords or a more syncopated punctuation, you're rarely being struck with an unexpected melody...

It's not all predictable though. For example, there are points like "Fires of Hope" where the metallic elements are dropped altogether to create a 90s British shoegazer/rock feel not unlike Catherine Wheel's dreamier outings, or the closer "Dislocated" where you hear some cleaner, spoken word vocals over a more directly post rock progression, but in general most of the tunes create a comparable mood. The bass lines are less than creative, Petterson obviously placing the brunt of his creativity into composing the rhythm guitars and melodies, but they bump along with blissful abandon nonetheless, and Marklund's drumming here is about as workmanlike and splashy as you would hope, considering that there's not a great deal of rhythmic diversity for him to work with. No, I feel like a lot of the real attention here is on Allain, and his harmonies are well enough rendered to distinguish De Arma from the pack, but not always the most elegant or tuneful. I will admit I actually thought the black rasped vocals throughout the record were entirely generic and in absolutely no circumstance did they ever deliver the climactic counterbalance intended...blandly structured.

But, hey, vocally they tried something different here, an evolutionary stopgap between Gilmore/Waters, Hayward and Jonas Renkse, with occasional deeper forays reminiscent of Kristian Wahlin's style in the Gothic metal band Diabolique. There would be a lot of potential if the supporting music were just a bit more interesting. I could probably count the compelling chord fixtures here on the fingers of one hand, but that's not to say it wasn't pleasant to listen through, and the 43 minutes weren't so tedious that it stretched out its welcome unbearably. Good ideas, they just need some sharpening, and ultimately De Arma might prove appealing to fans of acts as wide as the aforementioned melodic doom and depressive rock, to blackgaze acts (Alcest, An Autumn for Crippled Children), psychedelic prog, A Deeper Kind of Slumber-era Tiamat, maybe even a little pure Gothic rock like Sisters of Mercy.