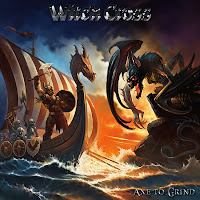 Last year gave us a rare treat in that Hells' Headbangers released the All That's Fit for Fighting compilation, a repressing of Witch Cross' Fit for Fight record with a metric ton of bonus content, in both CD/DVD and a lavish 4xLP format which is these days the preference for many collectors of vintage heavy metal. And 'vintage' Fit for Fight was, an album I've had the pleasure of enjoying for many years now, though it was a bit difficult to find in the 80s (several intermittent reissues made a CD available which I later snagged at a Fest in New Jersey, I believe). Great, melodic, well-written traditional metal with speed and hooks, not to mention the gorgeous, piercing vocals which were reminiscent of 80s Riot; perhaps not one of the most vital European recordings of that decade, and they never got to the same level as countrymen Mercyful Fate or Pretty Maids, but it's hard to hear a tune today like "Nightflight to Tokyo" or "Tears of a Clown" and not choke up on the awesome.

Naturally, the 2012 collection was a preface to a new studio record, the band having reformed about two years ago after 25 years of 'radio silence', with three of the original members being joined by a new bassist (Paul Martini) and the English vocalist Kevin Moore, who has been performing with Oliver Dawson's touring version of Saxon. Keep that last detail in mind, because it's going to be important here. I guess whenever I see news of some gem of a band getting back together, especially one that I enjoyed but knew not another local fan of, the cynic in me greets it with trepidation, while the 80s child inside me beats his fists in cheerful anticipation. Obviously, this can be done right, as the new Satan record Life Sentence has resplendently proven with what is undoubtedly a top record of 2013. But more often, you get disappointment, an album that might prove functional and even tasteful yet seems at odds with how the band originally sounded, creating a sort of parallel evolution. A  recent example of this was US power/thrash outfit Heretic's latest album, which reunited them with an old vocalist, but while decent, failed to live up to Breaking Point. So that's the elephant in the room: is Axe to Grind as good as Fit for Fight? Tall order...

But now that we've gotten that judgment out of the way, I'd be remiss to claim that Axe to Grind is not at least an entertaining, true to its roots heavy metal roundup which sounds like it's beaming at us directly from that decade of infinite wonders, the 80s. Bold riffing progressions lay it all out on the line, and Moore soars between his verse and chorus lines with relative ease. The caveat is that he sounds quite a lot like Biff Byford of the real Saxon, to the point that the album seems more like a lost 90s gem that might have been released before Dogs of War. This is especially the case when he's straining into a higher pitched note, where his inflection takes on a mildly nasal character reminiscent of Biff. To Moore's credit, a lot of his whispers and 'risks' here (like the unusual "Chelsea 100") seem intent on distancing himself from that very comparison, and he's by no means a clone of the better known front man, but the similarities are insurmountable and the result is that the record doesn't seem to cling to the lineage of Fit for Fight rather than present us with an alternate evolution which might very well have just been some other NWOBHM band and not Witch Cross...

So if you're expecting to hear Alex 'Savage' shrieking lavishly over the unforgettable hooks of anything even remotely resembling "Tears of a Clown" here, you're shit out of luck. But that's the beginning and end of the 'bad news', because Axe to Grind is what it is: a wayback machine. The Danes have eschewed the modern complexities associated with 21st century power metal and done their best to sound vintage. That they were able to bring in legendaries like Chris Tsangerides for a mix, and Flemming Rasmussen (I teared up when I saw his name involved) for mastering is nothing short of stunning, and you can feel the 'class' oozing out of the guitar tones, drum and vocal levels. I can only imagine these guys were fans of Fit for Fight, and I just love to imagine I live in a world where I have that in common with them. Both brilliant, and Axe to Grind sounds energetic through both the pulverizing, honest rhythm guitar tone and the bluesy, wailing leads, and just the level of atmosphere Moore brings to the table when you layer in the backing vocals or effects he is unafraid to evoke in the chorus to a tune like "Awakening/Pandora's Box" or "Bird of Prey".

As for the songwriting, it's admittedly nothing out of the ordinary, melodically imbued standard chords and mutes driving along at a medium pace, calculated to increase headbanging. I would have liked for a few slightly faster tunes to be interspersed with the rest, but certainly if you've got a thing for NWOBHM bands like Saxon, Praying Mantis, Tygers of Pan Tang or vintage Def Leppard (before their suckification) then nothing here will be news to you, and you can settle right in. Occasionally the chugging gets a little chunkier or they'll hurl a blander groove part at you, or a more left of center, proggy breakdown as you'll find in "Chelsea 100" with the maniacal, strange vocals, but pieces like "Demon in the Mirror" and "Metal Nation" are about as straightforward as you'll find. Superficially, the guitar riffs spark nostalgia for a more innocent time, but I don't think that translates into anything remarkable if one were to extract them from the rest of the instruments. Luckily, the drums sound fantastic, splashy and authentic, while the bass strums along with plenty of charm to help balance off the more atmospheric picking often conjoined to the rhythm guitar.

Axe to Grind definitely hasn't hit me quite as hard as Satan's latest, or the incendiary new Attacker disc, or even the new Warlord, but it's competent and deliciously retro enough that fans who want a trad European/NWOBHM hybrid should check it out, running smoothly at around 42 minutes with only a few jagged obstacles in there to hurdle. I'm a little letdown that it's not a match for its ancient predecessor, but at the same time it'd be a little presumptuous and naive to expect such material after such a long absence. On the other hand, does it live up to the notion of Vikings battling gargoyles? Here is a match-up I've never witnessed, nor can I say that I ever dreamed of it, but...sure?! Our axe-wielding hero obviously survived the clash against the man-bat-thing on the debut (though this could be the same creature with a graphical overhaul), and he seems older and wiser here, with backup, but no bare fleshed ladies to inspire him. Perhaps it is that loin-igniting passion which is lacking from the record, but for what it's worth, Witch Cross haven't gone and fucked it all up. At no point does Axe to Grind seem 'out of touch'. They promised nothing more than a good 'ol heavy metal record, and delivered nothing less.