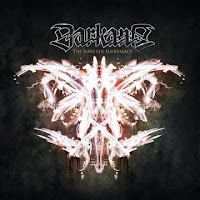 After a lukewarm 2008 effort with Jens Broman at the helm, I was kind of on the verge of writing off Darkane for good, so their decision to reacquire Lawrence Mackrory came as somewhat of a surprise, though they've always remained pretty tight, and even had him guest on albums after he'd left the group. This reunion obviously hinted at the possibility of the Swedes returning to their Rusted Angel roots. Having now digested The Sinister Supremacy a half dozen times, I think that's only marginally the case. His vocals and the overall setting and atmosphere of the record aren't quite so caustic and abrasive as the debut, but the punchy melodic  death/thrash and complicated impact of these cuts does play out like an admixture of Rusted Angel and Insanity with the clean mix of Demonic Art, but unfortunately not reaching that lofty songwriting perfection of Layers of Lies, hands down my fave of their efforts and among my favorites in all the Swedish exports of the 21st century.

It's still loaded, however, with the compact and forceful riffing progressions one would come to expect from their backlog, a violent and passionate vocal performance, and the bewildering level of musicianship that frankly has me stunned why Darkane is not held in wider regard. What I've long enjoyed about their music is how it can loosely cling to a standard rock or metal song structure but still deliver thrills through both its inherent complexity and rampant unpredictability. Unlike the lion's share of melodic death metal bands, once they start battering away at their instruments I often have no exact picture of what's coming next, and this holds true of The Sinister Supremacy. Rapid, rushed charged palm muting sequences are interspersed with dextrous grooves, gorgeous leads gleam through the driving rhythmic wasteland, and there's no end to the testosterone. This is a pretty substantial record, with 12 tracks and almost 50 minutes of material before the two bonus tracks, and something for just about any fan of the past works, or comparable acts like Carnal Forge or the first 3-4 albums of The Haunted, with the caveat that Darkane have always been more clinical, futuristic, and classically-inspired; as the intro "Sounds of Pre-Existence" and the piano/string interlude "Hate Repentance State" remind us.

To some extent, Mackrory is reliving his earlier years with the bands, the one difference being the added level of James Hetfield sneer of strained melody that he often breaks out in chorus sections, the perfect example coming right away with "The Sinister Supremacy" itself. Granted, he was meting out such lines as early as Rusted Angel, but with the further clarity of this record, it's much more pronounced, and took me some getting used to. Otherwise, the guy is snarling and growling with the celerity and fire associated with not only that first album, but also his predecessor Andreas Sydow, who in turn had carried the torch for him. Ideberg and Malmström remain fonts of ideas, patching together an aggressive, modern architecture that should sate fans of forward-thinking thrash, technical death, and even though the grooves don't quite carry that same blunt percussion of proper 'djent' bands, I feel like fans of melodic Meshuggah offspring might also really appreciate the level of concussion and finesse being contrasted here. Wildoer's drumming is, as usual, busily implemented and near perfect in its capacity to keep the music's frame compelling; and the bass guitars are pretty good, even if they often disappear into the murk below the rhythm guitar.

Not all of the songs really stuck to me, but there are a handful here which are shockingly awesome, in particular when they break out some mid-paced, mechanical riffs that remind me of the delicious dystopian landscape they have always conjured at their best. Cuts like "The Decline" and "By Darkness Designed" are brilliant amalgamations of Layers of Lies and Expanded Senses, thanks to their interesting note progressions and rhythmic diversity, but there are other spots like "Ostracized" or "Humanity Defined" where they simply tear your face off with more traditional, winding Swedish melodeath riffs redolent of a robotic, postmodern alternate universe At the Gates. Bluesy, evolved, rock & roll based grooves often break out amidst the busier, machine-like picking, and though it's quite consistent and often samey in construction, the album's brushstrokes are painted wide enough that it never suffers from monotony, unless of course you just really hate this style of harried, spastic future-thrash, in which case this is unlikely to change your opinion. Even the bonus tracks here are worth something, and in the end, even if it can't match Rusted Angel or Layers of Lies in scope or vision, and doesn't ultimately 'progress' into new territory, I'm still thoroughly enjoying it, riff after riff after bloody riff ad infinitum.