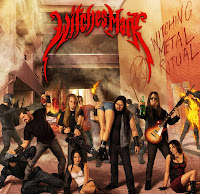 Unless you're GWAR, W.A.S.P., Immortal, or Running Wild (I'm speaking only of their phenomenal Port Royal record), it's quite hard to pull off an appearance on your own album cover without coming across as exceedingly goofy. Okay, yeah, even those are goofy. Granted, I'm sure that was sort of the point with Witches Mark's full-length debut Witching Metal Ritual, radiating a 'we don't take it too seriously so you don't have to either' vibe, but as much as I might find it cool to wield a minigun with a cute chick propped up against my leg, I feel like this does little but tease another ironic and unfunny party metal or pizza thrash disc which, being admittedly a tightwad (asshole), I just don't have a lot of patience for. I mean, we live in a world where a shitty parodic band like 3 Inches of Blood is actually taken seriously, so I'm obviously in the minority here, but the reason I bring up this superficial mojo is that I think these Texans are quite a bit better than the cover relates.

Not that Witching Metal Ritual is anything nearing spectacular on its musical merits, but I definitely think there's some space to work in this hybrid of filthy speed, power and thrash metal, and I appreciated that the vocals rely more on a sinister, cruel inflection than the usual shrieking indulgence, which is so often a crap shoot with USPM bands since the mighty 80s. Some of the lyrics and delivery are just too hammy for me not to roll my eyes at, like the opener "Bringers of Heavy Metal Death" where they are just too over the top, but on tunes like "Swarm" and "Salem's Fire", this guy is pretty fucking great, with a lot of acid to his melodies that recalls the vicious German speed and thrash like Risk, Running Wild, and Destruction, and a nice sustain similar to the great James Rivera. He will even employ some cheesy screams or harsher rasps for some balance. But does this level of character persist through the remainder of the record? The velocity and riffing variety being employed on the album reminds me of Demoniac (the pre-DragonForce band), or the aforementioned 3 Inches of Blood, but you definitely can dig out a lot of pretty sweet, obscure USPM like Liege Lord, Twisted Tower Dire, Cage, Deadly Blessing or Cauldron Born (they've even got a song called "Cauldron Born").

The musicianship here is very solid, with guitars that can match any pacing while delivering riffs that are busy but not manically complex to the point of confusion. Their production isn't all that great, so the melodies don't always pop out as much as you'd expect from a more polished recording, but at the same time they feel pretty authentic and directly translatable into a live setting. I wouldn't call the writing novel, since it draws from a lot of triplets and tremolo patterns that are standard fare in power and thrash metal rooted in the 80s, but there isn't a song that passes without something catchy happening, and they even bring in a lot of Euro power metal anthem picking, as in the title track. Leads are well written and executed, vocal arrangements are all consistently entertaining (after the first and worst tune, and before the finale which is also one of the weaker numbers), drums are spry and powerful with a lot of double bass driving to keep them consistent with today's power metal mavericks, and the bass lines are functional if not distinct.

I probably would have enjoyed Witching Metal Ritual more if it were just the middle six tracks, because I found them all much more catchy and less glaringly ridiculous (even the doomy "We Die"), but in the end I have to say it surpassed the expectations I had just looking at it. These guys have a savage sound which gladly eschews some of the wimpier flower metal traits often dragging down the genre, and once they fire on all cylinders they seem like a group of potential contenders in a USPM scene which has a lot of vacancies. Yeah, there's a long way to go before they reach a level like Attacker's latest album Giants of Canaan. The mix of vocals and guitars isn't great, and I feel like they should shed all goofiness and just embrace the fact that they can murder their instruments without the tongue-in-cheek pageantry; but I can definitely bang my head and beat my chest to a couple of these tunes, and their collective experience and consistently high level of energy might work wonders once the rest of the cards fall into place.