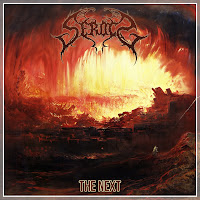 Most technical death metal records I get here for review have been so meticulously processed and produced that they seem written directly for the surgery ward, but unlike a lot of today's audience, this isn't something that gets my panties in a bunch. There's plenty of space in the world for both the clinical clarity and muddied, raw, 'organic' approaches to the style, and sufficient examples of quality in both. The most compelling component of Serocs' sophomore, The Next, is how it straddles the prowess and ferocity of one with the atmospheric trappings of the other. This isn't lavished in the sterile polish of bands like Necrophagist or Decrepit Birth, but pursues more of a messy, ripping and fleshy tone; yet you're still hearing a lot of the jazzy/progressive, musical lead guitar sequences and endless parade of riffs you'd expect out of cutting edge proficiency pundits.

That said, I was most reminded here of faster paced, frenetic Floridian forebears like Morbid Angel, Hate Eternal, Malevolent Creation or Diabolic, with the underlying chaos ramped up. Loads of psychotic, explosive tremolo picked passages dominate the landscape, very often punctuated with lots of frenzied, muted fills ("Weakness Fed the Fear" being a great example). Yet the band has no reticence against honing in on a mid-paced thrashing progression, keeping the tempos varied enough that the compositions naturally feel more labyrinthine and dynamic on principle. The bass player Mike Poggione, does occasionally get smudged below the force and impact of the rhythm guitar, but this guy is a human whirlwind just like his band mates (no surprise if you've heard his playing in Lecherous Nocturne, Monstrosity or Capharnaum), and his tone and lines are wild. Another international member, Timo Häkkinen (Sotajumala, Kataplexia) rifles through blasts and fills as if he were just tying his shoes, and the drums are treated with a sincere, loud mix that somehow does not detract from the business of the guitar playing.

The vocals are handled by another Lecherous Nocturne alumni, Jason Hohenstein, who barks with a lot of gut-fed hostility, but they also layer in a lot of snarls and rasps which lend The Next a bit of a deathgrind feel (Nasum meets Malevolent Creation) rather than the ominous sort of growling so popular out in the field today. Really, though, the center of the show is Mexican guitarist/core member Antonio Freyre, whose blinding, blazing wall of riffs is going to make or break any listener's enjoyment of the album. To be honest, I did not find a lot of the individual note patterns here to be all that interesting when picked out of a lineup, but the guy just hurls so many in your direction that at least there is some replay value out of deciphering the constants shifts in chords. The energy is incendiary, and once settled into a few of the groove hooks they do become marginally hypnotic, but there are various ideas strewn about the 33 minutes of music that I wish were allowed to hang out just a few measures longer. The Next is occasionally collapsing over itself due to its earnest ferocity and complexity, and thus most of the progressions really fail to resonate beyond just the mere thrill of their pursuit.

Don't get me wrong: this guy is a mad player, and one thing I liked was that he wasn't constantly indulging in wank-fests. The leads are tight and controlled, never excessive or eye rolling and never soused with effects to the point that they sound otherworldly. The focus is very heavily on the mile a minute, winding, contracting and colliding rhythm guitars, which unfortunately didn't connect with me that often apart from the sheer physical contact of kicking my kneecaps and punching me in the face. The other musicians turn in intense performances, but they're ultimately restrained by the scattershot delivery of the guitars, and while I appreciated the voracity and variation in the vocal delivery, and the violent lyrics, there was just not enough to compensate. But these gripes aside, avid death metal fanatics who aren't opposed to a high level of prowess and technicality, but feel often snubbed by the studio apepsis attributed to the majority of modern brutal death recordings, might find an acceptable refuge in the sincerity of Serocs aesthetics. This is currently available as a digital album, but Comatose Records will be releasing a physical alternative in the autumn of 2013, so check that out if it sounds appealing.