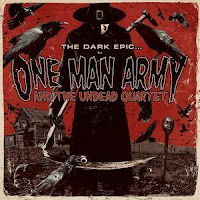 Had anyone asked me if I would have missed One Man Army and the Undead Quartet if they disbanded after dropping from Nuclear Blast, I would have answered with indifference, but once Johan Lindstrand and company stopped farting around and got down to business with their Massacre Records releases, we were seeing a fairly strong contender for that 'vacant' Swedish death/thrash throne that bands like Carnal Forge never quite mounted, Darkane kept sitting on and then promptly absconding, and The Haunted never deserved, because let's face it, they eventually started to suck even worse than anyone could have ever imagined. The Dark Epic... isn't exactly a masterpiece, or even a great album in the end, but as the One Man Army swan song it suffices, a balance of hooks and aggression which faithfully carry the torch for Grim Tales while changing a few of the rules. Though the band had already become less active by the time of its release, with Johan about to return to The Crown, this certainly doesn't sound like phoned in contractual filler, though it's not quite good enough that you feel the three years were spent honing it to perfection...a first, since they earlier fired off three full lengths in three years.

This was the one album from the band I admit to having had little knowledge of, being so busy listening to and reviewing metal records in 2011 that it must simply have passed me by; so I apologize for the mild delay in covering it. Nonetheless, The Dark Epic... is interesting immediately because of the change in art style gracing its cover. A scythe-wielding, Solomon Kane-like figure surrounded by crows with the band's logo imposed over him seems almost a kitschy, comic book/horror presentation, created by none other than Björn Gooßes, front man for the German band Night in Gales. Beyond that, the album has a more blunt and straightforward production that lacks a fraction of the gloss of its predecessor, but compensates with a little more punch to the rhythm guitars (like the first album), thick bass lines and another intense performance from Marek Dobrowolski; who I'm surprised hasn't been picked up by some major European band, since he's one of those 'total package' drummers with great, snappy snare tones, plenty of solid fills and capable footwork whenever required. As far as the songwriting goes, I found this was actually a little more diverse than Grim Tales, not that it's ultimately superior (it's not), but they cast a broader net and pulled back a wider selection of riffing patterns and tempos which help pace out the 48 minutes (their longest record since the debut, if I'm not mistaken).

Granted, few of the riffs themselves are truly inspirational or unique, what with 25 years of thrash, death and eventually admixtures of the two behind them, but no question they're busy enough and imbued with enough melodies to satiate the modern melodic death metal fan who has followed that scene since At the Gates, Dark Tranquillity, Carcass and others pioneered it in the earlier 90s. It certainly wouldn't have been out of place to hear these rhythm guitar progressions on a record like Slaughter of the Soul, Heartwork or The Haunted Made Me Do It, but that's not to accuse them of painful familiarity. Solid, dense palm muting and intensity dispersed at a measured clip, and the lead sequences here are among the most developed in the band's discography. The titular "Dark Epic" uses some acoustic guitars to set up a slower, steadier, and more dynamic, melodic sequence than much of the album, adding to the well-rounded impressions it leaves. Johan Lindstrand seems pretty confident here, as well, not so explosive as he might have been on a few of those Crown records, but at least he's not wasting half the album experimenting with cleans; he focuses in on his harsh, semi-emotional barking vocals which snuggle him safely between the raspier Carcass timbre of Tomas Lindberg and the less pronounced Tony Kampner (ex-Witchery).

This is definitely a record for fans of Swedish bands like Carnal Forge, In Thy Dreams and 21st century efforts from The Crown, so don't expect a lot of 80s personality in the thrash elements. It's meatier and marginally more brutal, and like its predecessor Grim Tales the lyrics take a pretty interesting tour through classic horror concepts. Well-written and meaningful rather than just gory. I think ultimately this is the disc I would have liked 21st Century Killing Machine to have been, a debut which I found as piercing and effective as particles of sunlight on a rainy, overcast day; it bears a pretty close resemblance to that in sound, but the riffs are more driven, stylized and entertaining like the third album, the only one it doesn't meet or surpass in quality. The Dark Epic... has nothing on other albums from this region in 2011, like Morbus Chron's Sleepers in the Rift, which was rewriting the script for death metal nostalgia, or Antichrist's Forbidden World, a deathlike thrashing which was so fucking phenomenal that it was like having Hell ejaculate into your ears, but to their credit, One Man Army and the Undead Quartet had a closing chapter they could at least feel content with. Nothing special, but well ahead of where they were four years earlier.