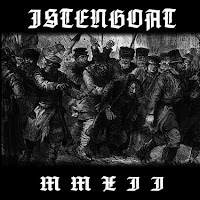 MMXII is an interesting one, a 2012 EP from Chile getting a new release through Sweden's Blood Harvest imprint this year. From the cover alone you'd think this was some sort of political or historically inspired black metal, but in fact Istengoat play a very primal, resonant and well tended brand of old school death metal which is not terribly easy to pigeonhole. It's not Incantation worship, nor is it Entombed worship, but rather a melodically-infused descendent of death, grind chords and perhaps a bit of Scandinavian black circa the mid-90s. I also made out a hint of old Morbid Angel (Altars of Madness) during some of the faster riffing as in "Avatara", but kudos to the Chileans for managing to set themselves up an actual identity rather than riding any specific coattails too closely.

The vocals are a nasty, nihilistic, reverb-soaked bark which single-handedly fuse a level of atmosphere to the songs that might not otherwise existed on the riffing alone. Almost a South American Chris Reifert circa the earliest Autopsy full-lengths. However, the guitar tone is great, clean and crisp but still primal enough that, once they're vomiting forth some tremolo picked rhythm you feel like you've definitely come to the right morgue. Bass can be a little hard to hear in some places, but it's racing along to the guitars with a decent energy, and you can make it out when he's also using the tremolo patterns. Of course, when he's alone, like the breakdown in "Pogrom", it sounds thick as clotted blood. Drums are quite prominent, in particular the snares and toms. The kicks have a machine-like precision to them also, and the guy's keeping them up even through much of the moderately paced material. Beyond that, they've got a decent, screaming sense for leads and melody that erupt blissfully over the unending tirade of riffs, and honestly I can't think of a simple complaint with the production beyond the fact that when the rhythm guitar lays out some of the solid chords, the bass tends to exit attention span.

Riffs aren't individually composed with the most memorable quality, nor are they all unique, but I will say that they're far from predictable, since they cultivate a heritage of death, black and thrash motifs evenly. Faster Floridian death chugging, walls of driving chords, you name it. When I hear the opening notes of an Istengoat song I'm not exactly sure where it's going next, and I often wish I could say the same for many other bands. There's clearly a sense of refreshing authenticity, like in writing the band was not committed to any one blueprint but just let the riffs go where they may, and then covered them up in the vicious, raving vocals. Truthfully, I wouldn't mind hearing more variety in that department, but the guy can clearly sustain a growl well and when spitting vitriol with a faster syllabic syncopation he sounds appropriately menacing. MMXII is a record with crossover appeal, fans of archaic US death metal, older black/thrash, Canadian war metal or more current, atmospheric black/death throwbacks like Weregoat and Godless will find something to appreciate. This is a good sampler, and with luck a preamble for a full-length with even more variety and even stronger riff progressions.