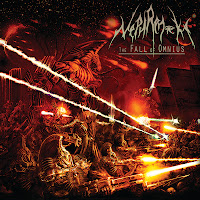 I was primed for The Fall of Omnius based on its concept alone, not because it's simply a Dune-themed album but because it actually has the audacity to dip into the greater milieu of Herbert's fictional universe, an emphasis on the 'Machine Crusade' series of events which was more or less Frank's vision of an A.I. dominated epoch that was challenged by sentient man. Pre-Skynet, pre-Matrix, it existed in the backdrop of the Messianic saga of Paul Atreides on Arrakis until Frank's son and Kevin Anderson transformed it into one of their prequel trilogies. Some have of course written these off as a simple cash-in, and some are clearly written better than others, with more obvious personal inspiration involved, but as a total sucker for dark, dystopian space opera (like this universe or the Warhammer 40K fiction), I at least enjoy the expanded universe-building and find some of the plot lines more interesting than even Frank Herbert's sequels to the original Dune novel.

So it's rather fascinating that a French death metal band feels the same way, although I won't say that this is an album which musically reflects the science-fiction/space opera fiction...not entirely. Some of the choices in dissonance, pummeling rhythm patterns could certainly represent the mechanical nature of the antagonists, and evoke a slightly alien, futuristic vision, but we're not talking Dimension Hatröss or Nothingface here, a new language in metal music. Nephren-Ka, name taken from the 'Black Pharaoh' character in the Cthulhu Mythos (though there are some clear musical parallels to Nile), is a death metal act highly reminiscent of the evolutionary period between bands like Morbid Angel, Gorguts, Deicide and their modern offspring like Hate Eternal, Krisiun and the aforementioned Nile. Brutal, pinpoint riffing sequences defined by their sheer speed, punctuality, and verve. Ominous octave slides, sweeps, unapologetic blasting streaks and intense double bass footwork, among other genre tropes that place this somewhere between Coven or Domination-era Floridian insanity and something like Conquering the Throne, Amongst the Catacombs of Nephren-Ka or their peers. That's not to say that the Frenchmen are a direct clone of any one band, but clearly there are precedents, and thus Nephren-Ka fits in snugly with other Kaotoxin acts like Ad Patres and Savage Annihilation (who are both pretty good).

The Fall of Omnius is fast, punchy, and lethal, but it also pays some honor to the old school aspects of its genre with loads of simplistic, tremolo picked patterns strewn between the more energetic bursts. The mix is quite understated, without a lot of reverb or brightness in there, just a metric ton of riffs delivered honestly and earnestly through sore wrists, and beats that reveal an amazingly consistent ankle strength. It's actually clear in terms of making out the notes, but there's a murkiness or clinical flatness to the whole affair. On the one hand, there isn't a lot of 'exotic' feel to the music, you don't really feel like your transferred to this other universe of the lyrics, but some brutal death metal diehards of the 90s will undoubtedly appreciate the lack of gloss and glitter. Even the leads are pretty straightforward, squealing or searing along in short spurts that do their job and nothing more. Vocals are faster paced gutturals with little variation or distinction, reminding me of a Steve Tucker or Chief Spires, with some backing snarls in the Deicide tradition. Also gotta give some props to the bass playing here, because it's incredibly dense, concise and percussive and you'll rarely lose it beneath the rhythm guitars; it adds some breadth and atmosphere to the intensity.

Admittedly, The Fall of Omnius is not a record on which the individual tracks do much to distinguish themselves from one another, despite the constant influx of new riffs and tempo shifts. This is a consistent brutal death metal assault from beginning to end, but apart from a few of the more freaky and off the hinges moments in tunes like "Feydakins Storm", I was let down that it didn't do a better job of conveying the atmosphere I wanted. Perhaps some tasteful industrial instrumentation, samples or even faint hints of keyboards and ambiance would have provided a better immersion into the chosen, imaginative setting. There would be no need to go cheesy, but I'm just a huge fan of sounds and concepts finding that perfect marriage, and this to me seems more like a standard brutal death metal record circa 1999-2003 with the inspiration explored only through the titles and lyrics. A lot of hooks, but few that pierce the flesh. Not for the faint of heart, but at the same time, rather one-note in style and mood. That said, it's a decently executed record which should put a strain on the necks of anyone into fellow French acts like Ad Patres or Kronos, and certainly Nephren-Ka has enough intensity and proficiency to appeal to the fan of Hate Eternal, Diabolic, or earlier Nile.