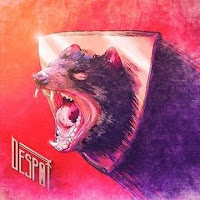 The cover of Satan in the Death Row definitely gives off the vibe of a more traditional heavy metal record, but this is in fact an all-out, one man black metal express replete with synthesizer orchestration, lots of tempo variation and no shortage of atmosphere. Despot is a Brazilian project involving one B.A.V., who had previously spent years in other Belo Horizonte underground acts like Necrocult and Unholy Massacre before turning his attention strictly to Despot, and this is the first proper full-length experience which is being offered through Bandcamp. He covers all instruments and programming, and if nothing else I came away from the album pretty impressed by the guy's sinister energy and also his willingness to balance off subtle atmospherics with brutal intensity...

A great example of this is the track "Auto-da-Fé" which is a face-tearing black/death metal exhibition that seems like a bastard blackened spawn of Morbid Angel and faster Sarcofago, only he tosses in a lot of eccentricities like chanting and whispers against the filthy onslaught of proto-black/thrash riffs and mechanized sounding kick drums that will leave compound fractures on your skull. Vocals are a harsh, nihilistic roar with a bit of resonant echo, though he can easily veer into rasps or guttural growls for added effect. Subtle sweeps of symphonic keys are executed in the background to create a fulfilling level of drama. B.A.V. is also a rock solid bassist who makes the instrument well known with lots of grooving fills, and as a rhythm guitarist he is even better, keeping the riffs busy, varied and even semi-clinical or technical as he churns up a batch of thrash, death and black metal techniques with ease, cross-pollinating the picking styles so that they remain provocative and engaging even when they're not specifically catchy. The one caveat is that I felt the leads here were sloppy in execution...sort of arbitrary, indulgent, frivolous, uninteresting and not very well put together or even effective as fits of disjointed chaos.

Some are likely going to have issues with the production on the record, in particular the drum sound, but I actually found them bombastic and pummeling enough to mesh in with the soaring synths and choirs, and grimy lead vocals, and it even gave a hint of an industrial/black impression circa Thorns. I do feel like the rhythm guitars would have been better served with a more potent and robust mix, that might have helped balanced out better against the programming, but in the end, for a one man project, you can hear just about everything and a little bit of rawness or imbalance does help to give Satan in the Death Row a refreshing, hellish visage that takes you back to the 90s when black metal recordings were all slightly 'imperfect' in legendary ways. Most importantly, though, B.A.V.'s riffing style is rather peculiar, with a lot of early 90s death/thrash flair that you don't normally experience in the context of black metal. Morbid Angel, maybe, but some of the patterns even reminded me of bands like old Atheist or early Sadist which I never would expect on a black metal production, though this is probably just my imagination.

At any rate, Despot is a compelling project, worth your support in at least checking out, because while there are clear parallels to 90s black metal delivered through the atmospheric synths, that give the record that sense of nocturnal majesty you might recall from a record like In the Nightside Eclipse, Born of the Flickering or Enthrone Darkness Triumphant, the supporting structures of the rhythm guitar are generally even more interesting and give this album a semi-original sound that was compelling to become lost in. The mix can be tightened up, with fatter guitars and maybe a better tone for the bass and guitars, but this guy is no joke, and anything from the concentrated majesty of "Le Roi Nu" to the scathing sympho-black-thrash of "Egregious" just reeks of fiery creation and actual effort being applied. The lyrics are also quite awesome, minimalistic fits of infernal and haunting poetry. I dug this. Check it out on Bandcamp, and let the man know what you think.