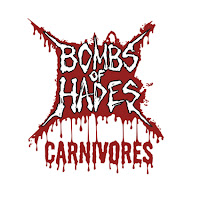 Bombs of Hades is another band paying some obvious fan service to their Swedish forefathers, but there are subtle hints that they come from a more distinctly crust and hardcore background. They simply slather it in that raunchy-ass death metal distortion we recall from Entombed and Dismember, and thus a lot of the tremolo riff lines here do feel as if they could have been jerked off Left Hand Path, Clandestine or Indecent & Obscene. Hardly archons of originality, and truth be told I've grown exhausted by so many bands borrowing the old aural trope, which I've rambled on about many times before. But, despite this pervasive sense of having 'been there before one too many times', these guys are fairly exciting songwriters who keep the pacing steady and interject a lot of hellish energy into the simple chord progressions, while not shying away from the use of evil melodies and wailing, bluesy mini-leads that helped define Entombed and their peers as they transitioned into the death & roll of the mid-90s.

Basically, if you find yourself itching for more of that Clandestine/Wolverine Blues vibe or you've run out of Disfear records, Carnivores is a respectable scratch... Five tracks, bloody and willing, driven by a juicily distorted pair of rhythm guitars and crashy sounding drums with a lot of tsssshh tssssshhh cymbal to support the varied melodies and solos. Vocally they're a little more brutal than the average band in this field, backing up the central rasp with guttural barks spewing out cult horror. Structurally, the riffs here are nothing quite unexpected, but there's enough internal variation to fuel these 2-3 minute compositions, from the shit-kicking d-beat bridge of "Slaughter the Dead" to the funereal, cemetery swell opening "Necronomicus Kanth (The Hounds of Hell)" with a touch of synthesizer. I think my favorite track was the closer "Coffin" which is just pure old Swedish death metal ass-razing with some eerie trilling leads in the breakdown, but overall the songs are roughly even in quality, so you never find that anything really sticks out from the rest over the 14 minutes of content. But, then, sometimes that's not a good thing...

There are probably a thousand bands now playing with a similar sound, in Sweden, greater Europe, and even in the States. Bombs of Hades have at least been doing it for some time (formed in '02), even though this particular EP (a 2013 Re-issue from 2008) was where they really started to become productive. Carnivores does compare decently to a lot of the stuff coming out five years later, but truthfully they've got some better songs on their intermittent full-length records Chambers of Abominations and The Serpent's Redemption. But if you missed out on a chance to own the original 7" for this, or you just find yourself driven to collect all that walk the path of Entombed/Nihilist, Discharge, Repulsion and Carnage/Dismember, I can't think that you'd hear this Blood Harvest re-release and be disappointed. I got some brief enjoyment from the songs, yet I can't imagine any situation where I wouldn't just prefer the influences themselves. That said, the production is good and dirty, the DIY attitude is obvious, and there aren't any prevalent negatives apart from the sense of over familiarity and redundancy I experience when listening through this style of death metal.