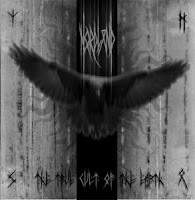 There is this mythological niche in the black metal universe which has of late held a lot of vacancies. I speak of course of that primitive, Nordic majesty once wrought by titans like Bathory, Immortal, Satyricon and Enslaved in their 'primes', or at least when they were molding schematics for the genre to follow them, before traipsing off into their own respective evolutions which often took them to distinctly different pastures. Grim, glorious, epically orchestrated black metal in homage to the paganism and history of Europe, and the sprawling wilderness in which it all took place. Records like Blood Fire Death, Battles in the North, Nemesis Divina, Sons of Northern Darkness, Frost and Dark Medieval Times have forever carved themselves into our hearts, and what makes England's Nordland so special is how it genuinely seems to honor their tradition with an impressively produced, full immersion tide of grey conquest. A spiritual successor to the aforementioned works, and remarkably still manifest from the imagination of a single musician!

When I compare The True Cult of the Earth to its eponymous predecessor, it's quite clear to me that Vorh has done his homework, because both the material and production values here surpass the debut in every conceivable category. The guitars sound even more loaded and emotionally destitute, like the thunder of an ancient Anglo-Saxon battlefield twisted into distorted musical flesh. He doesn't write rocket science riffs here, but primal and potent structures of chords that pound like a flagon on a skull, though they are very often imbued with a saddening sense of melody. The bass playing on this album is fucking magnificent, not because it's technical or particularly groovy, but because it's so voluminous and driven that you can always imagine if the guitars dropped out, that the songs would still haul ass with the rhythm section alone. A lot of maudlin, empty vistas of open picking and sustained chords are interspersed with the burlier blasted sections, and the drums crash, batter and blister along like a cavalry charge through a burning village. Vorh's vocals have all the savagery of an Abbath Doom Occulta and yet also retain that strange sense of vulnerability that emitted from Quorthon's tore throat on the late 80s Bathory records. Nihilistic and imperfect, but then that's the allure...

As if this wasn't all huge enough, Vorh implements cleaner, scintillating string sections (like the bridge of "Dawn Calling of Thunor"), brooding ambiance ("The Great Hall of the Sky"), and distant samples ("Crows") to round out the sum experience. It's largely a guitar driven, traditional black metal record, but carefully matched up with enough placement of atmosphere that it feels like so much more. Without being particularly inventive or unique, The True Cult of the Earth has such a massive sound to it that the listener feels dwarfed by its sense of scale. Seriously, I found it difficult to listen through this indoors, because it seemed it would shake the walls and roof off...unwilling to be contained. Individual riffs are not consistently memorable, but taken as a whole this is just a 'chin up', defiant kick to the teeth of a modern world in which many Europeans have lost their cultural roots/identity. Songs of olde for the ears of now. The album packaging is also quite excellent, and the lyrics will immediately appeal to fans of Enslaved, Immortal, Bathory and Summoning, sweeping and personalized paeans to the Earth and Gods. A solid step forward for Vorh, a tremendous trip worth taking, and further evidence that, alongside bands like Winterfylleth and Wodensthrone, England has developed quite a scene for this stuff in the past five years.