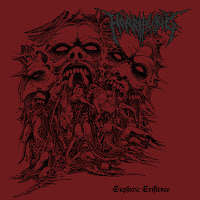 As the wheels of ancient, ghastly death metal continue to grind along a highway of human flesh and bones, the chorus of engines is joined by past-obsessed acts the world over. It was largely a European/USA thing at one point, but now Central and South America have chimed in with a good number of acts, some of whom are pretty interesting, others not so much. As for Horrifying, a Chilean act releasing a new, limited 7" EP through Blood Harvest records, one of the most devoted labels of this decrepit old school revivalism, this is more of a stretch into the deep past of death metal. Not a Swedening, not a particularly cavernous sounding affair, but something that recounts the raw roots of the form.

There isn't a damned thing on this small collection of tracks which sounds like it was written post-1992, not a single technique here brings to mind anything remotely modern beyond, say, Onward to Golgotha, and even then they don't utilize the Craig Pillard style gutturals, but more of a mid-ranged, partial hybrid between a bark and a rasp that feels entirely caustic and primitive. But, being this archaic in nature is not necessarily enough to titillate the imagination with delicious nostalgia, the thing needs riffs...and to their credit, while there is nothing even marginally original presented throughout Euphoric Existence, the song-craft on the two longer tracks is varied and at least respectable. For instance, the title track sounds like a rawer interpretation of something circa Scream Bloody Gore but with a more echoed, evil vocal style and a huge breakdown with atonal squeals that would have also felt at home on a pre-1990 death metal prototype, not to mention that it does continue to grow slower into a massive, death/doom lurch that keeps the listener engaged.

The other stronger tune here is "Petrifying Hallucinations" which relies heavily on dark, dense tremolo picked patterns that sound like a mashup of old Death and Incantation, only with some zipping, sinister guitars and that raucous vocal performance. Really loved the totally off the cuff, messy lead sequence embedded there and the surgical thrash/death riffs often coursing through the surge. Can't say I was quite so impressed with the opening, under 2 minute piece ("An Agonic Death") but it had a similar effect to this song. At any rate, the production is pretty steady and consistent throughout the 12 minutes of the 7". Both rhythm and lead guitars are possessed of an unpolished primacy that stirs the guts, but clear enough if you pay attention. The drums are expressive, nasty and loud, with a lot of blasting, storm-like fills but also the ability to break it down to a barebones, sparse rhythm for the second track. It's definitely an invigorating and exciting sound to it, despite the obvious age of the approach, but that's not to say the riffs are all great or interesting.

Regardless, there is an audience for this and I find it hard to believe they'd be disappointed with Euphoric Existence, even if it serves only as a teaser for something more substantial in the future. I've honestly grown a little fatigued with this stuff lately, since not a lot of bands are doing anything different or bringing much of a unique identity to the style, and there are just so many new bands emerging into it. But Horrifying is without question a competent newcomer. I found that they were adept at capturing their intended atmosphere, and keeping the songs punishing and morbid, even if it wasn't quite as memorable as the stuff groups like Horrendous and Morbus Chron have been releasing. Raw, unruly and determined, but there still might be a distance to go in the songwriting.