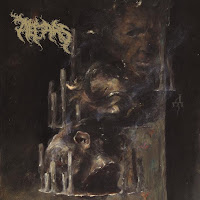 Dissonant, post-modern death metal is hardly a new manifestation in the field, but to this date there are still only a handful of bands birthed in each generation that manage to pull it off with style, and Australians Altars are about to join that limited roster with the release of their full-length debut Paramnesia through Nuclear Winter Records. This is a record that will invite immediate comparisons to the band's more unusual countrymen, Portal, or their offshoot Impetuous Ritual, but they don't play with quite the same level of impenetrable grime and sleaze. This is an easier puzzle to piece together, with a more accessible, if still murky production, and some churning, primordial callbacks to the sounds of surreal black metallers Deathspell Omega or Dodecahedron, maybe even some riffing constructs redolent of Morbid Angel, Gorguts, and Incantation.

But Paramnesia's most impressive feat is just how it engages the listener through varied and compelling riff construction, developed through a contrast of slow, crawling, morbid palm-muted grooves reminiscent of stuff like Blessed Are the Sick or "Where the Slime Live", and open ranged, layered tremolo riffing that recalls the sinister roots of seminal, cavernous New York death metal (Immolation, Incantation). Vocals are embedded into the muck pretty deeply, like a grotesque xenobiologist attempting to narrate the mating of squamous, voidspawned horrors but being drowned in the riffs' lustful interactions. Normally I might find this slightly offputting, but you can actually heard him loudly enough, his inflection a hybrid of David Vincent and 'The Curator' with a great, ominous Craig Pillard-gurgle when he sustains a growl. Drums cycle seamlessly through the broken grooves and the numerous outright blasted progressions, with a lot of emphasis on the thunderous fills, which often themselves become the center of attention like the bridge of "Khaz'neh". I did not find the bass guitars to really stand out from the crowd, but they're creepy and add to the depth of the mix.

The structure of Paramnesia is split between the first five, independent tracks and then the titular trilogy in which the band grow marginally more experimental with the haunting, lush ambient guitar feedback piece "Gibbous" or the screaming 'lead' that cuts through the bowels of "Descent". The 10-minute monster of a finale called "Ouroboros" just beats the fuck out of you as the Australians revisit the techniques used leading up to it, and there's a firm sense of closure and completion across the whole 43 minute experience. That there are precedents to Altars' sound is unquestionable, many of which I listed above, and this is not a band which innovates above and beyond those influences at any point here. We're not burrowing through new soil, but rather compacting the old dirt into a listenable, textured and varied whole which is very much listenable throughout. Be warned that it's not highly melodic or 'catchy', but more of a roiling, harrowing journey with a few brighter, brief and forgiving intercessions. It sounds like it looks, and Denis Forkas Kostromitin's cover art is as usual fascinating, like his piece for the full-length Grave Miasma debut. Good stuff all around, and I'd certainly point it out to fans of Portal, Ignivomous, Mitochondrion, Dodecahedron, Flourishing, and any number of comparable acts churning the Earth of the 21st century.