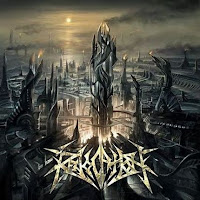 Empire of the Obscene was an album I had the highest of expectations for, and that probably played into my ultimate disappointment with the thing. Having been in attendance for a number of Revocation's live gigs here in the Boston area, I was witness to their explosive energy on stage and their pinpoint musical ability, and the material they were playing was what constituted a lot of this debut. But for whatever reason, the riffs seem to have lent themselves better to a performance rather than a studio disc, because here they don't feel so innovative or interesting, and this is more or less a lengthier expansion to their Summon the Spawn EP, embodying all three of those tracks and a bunch more in that mold. There is a sense of 'padding' here, with a lot of simpler riff structures you don't expect out of Revocation, which in ideal circumstances would make this their most grounded, down to earth writing, if it was terribly interesting. Fuck, the first time I saw the excellent Pär Olofsson cover art to this thing I got shivers...dystopian, ominous, nerdy, symmetric perfection...but the tunes in no way live up to that vision. If only it had been on a Vektor record!?

Anyway, Revocation's professionalism and ability certainly translated to this disc, and you can see why it garnered the label attention that ended in their signing with Relapse. They had chemistry on the stage, and also off. Empire of the Obscene is clean and pummeling, with that swarthy and voluminous purity we heard on the Summon the Spawn EP, only a fraction better. Deep, bowel churning kick drums and a great guitar tone that seemed to combine the mid 80s Bay Area/Master of Puppets aesthetic with something capable of ferrying the band's more modern tech/death metal influences. Buda's bass-lines were dense, leaden and cleanly carried forth in the mix, and even if I'm not the biggest fan of Dave's vocals, here they were at their most salacious and vicious, especially where he lays on the more guttural, gory edge to them. On the other hand, the record is a grab bag of riffs that at best represented the more clinical side of late 80s thrash ala Heathen's Victims of Deception or Sepultura's Arise, and at worst some pretty overt influence from melodic Swedish death metal bands like At the Gates, or on occasional a more brutal aspect of modern post-Suffocation USDM. Unfortunately, even at their most melodic and accessible, the songs here like "Fields of Predation" often feel driven more by superfluous displays of technique than raw emotion.

I'm not sure if they fattened up the album based on the pretense that they wanted more on there apart from the demo/EP tracks, but some of the choices here like the 5 minute instrumental "Alliance and Tyranny" are the sorts of songs I hear once and soon forget, a piece that might of well just been on an Angela Gassow-era Arch Enemy record. Better if Empire of the Obscene had been tightened to about 35-40 minutes of the most kickass material and left excursions like this one out of it. I get that it reveals more of Revocation's progressive rock/metal influences and their willingness to branch out, but it's a lot of wasted time after just one decent, melodic riff. The "Stillness" interlude, too, a gentle acoustic piece that goes nowhere apart from furthering the notion of versatility in the trio's arsenal. There are other songs like "Age of Iniquity" which have really boring thrash/death stop/start patterns among them which simply don't seem to play up to the group's obvious proficiencies, and I wish they had just cut the chaff in a lot of places here. I mean it says a lot to me that the Summon the Spawn material remains among the strongest here...and I was just expecting this to burn the house down and revolutionize modern technical metal. It does no such thing.

But at worst, Revocation are simply providing an exhibition of their chops and technical potential here with a pretty harmless set of riffs that occasionally grow more exciting than stock late 80s riffs sauced in 21st century production standards. Empire of the Obscene is by no means a 'bad' effort, and modern pundits would appreciate its level of balance and control. The lyrics are decent if topically scattershot, and for an album that was initially self-released, Pete Rutcho's production was pristine, polished to a modern pop/rock level, without losing the ability to wrench a neck out of its socket or punch you in the nethers. For whatever reason, though, each time I've gone back to listen to this over the last five years, it has become more and more expendable. The songwriting is far more bland than the sophomore Existence is Futile (still their best album), and it was pretty obvious they were just getting warmed up even when this first dropped. Sleek, competent death/thrash metal that will probably be more impressive to those who never experienced the 80s or 90s influences firsthand, but not terribly exciting or interesting compared to something like Vektor or Immaculate.