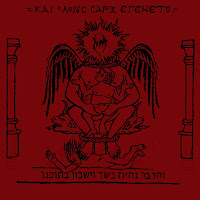 While their prior six full-lengths all tended towards a milder range of variation from one another, Και ο λόγος σάρξ εγένετο almost seems like a new era for Greece's Naer Mataron. Not because it abandons the precepts of its predecessors, or the black metal genre as a whole, but because it molds them into a seasoned, nearly 60 minute experience which itself incorporates an immense level of versatility. But perhaps the most impressive thing I can say for this album is that it embraces the group's Hellenic heritage more severely than any of their older works, not just because of the folksy sing a long tracks here which took me completely by surprise, but also because the metal riffing itself was occasionally evoking the majesty of Greek legends like Rotting Christ, Varathron or Thou Art Lord, something that was in shorter supply with their more aggressive albums that reflected more of a Scandinavian black metal aesthetic.

There are some mid-ranged, almost thrashing/black riffs in the breakdowns and bridges here of tunes like "Demon's Lord" or "The Light Bearer" which take you straight back to what was so special about this scene in the mid 90s: a defiant implementation of traditional heavy metal melody in a niche generally reserved for tremolo picking purity or bum-rushes of glinting, dissonant chords. Not that Και ο λόγος σάρξ εγένετο is entirely void of either of those things either, but Kaiadas and company leave themselves plenty of openings here to explore tempos and atmospheres, which wasn't always the case on older records. The guitars have a lot of punch and clarity to them, especially the muted phrasings, without sounding overly saturated or raspy in their distortion. Some slower, doom-like passages are explored, like a cover of Sarcofago's "Nightmare" which sounds pretty damn smooth; or the contemplative opener "The Magus", which is a slow, sparse and simple composition over which Kaiadas delivers some chilling, cleaner, spoken lines before it convulses into a glorious Greek black riff and he starts his impetuous snarling. For anyone who missed their older style, they do throw out a few bones like "A Secular Pursuit of Coffins" which is straight, nasty, blasted black metal.

The experiments here are likewise pretty great, like the 14 minute title track finale which is a fusion of folk, ambient and tribal drumming with some bluesy guitars and odd, tonal chanting. It's almost as if "Planet Caravan" were re-written through the lens of a Greek folk act, and fairly immersive if you just chill out and give it a chance. The eerie male/female chants of "Eternal Ice" really set up "The Light Bearer", and "Nyhta Pagani" is a wonderful piece for meditation, with traditional guitars and layered female vocals that sound wonderfully genuine rather than corny. Traditional instruments used here include a yayli tanbur (a long necked Turkish lute), a lyre and Tibetan 'singing bowls' (standing bells) in "The Hunt", and all are used rather well with a very natural sense of production that almost feels like you're listening to them in the eaves of the Parthenon, or outdoors in some square of Athens centuries past. Even if there are only about five actual metal originals on the record, it all seems so well balanced and unpredictable, and when you include the simple but attractive digipak packaging/artwork, this is really the most fascinating Naer Mataron to date, no taint at all of a band simply 'going through the motions', but one committed to expanding itself. It's not Praetorians II (my own prior favorite from the band), and it might turn off fans who just tune into this band for its sheer savagery, but nonetheless it sets the band a new standard of aesthetic charm.