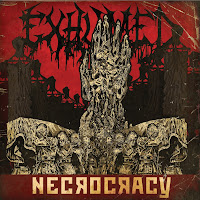 The summer of 2013 provides us a rather interesting opportunity to pit the work of a death metal master against one of its brightest pupils. I've not yet had the chance to give the Carcass reunion effort Surgical Steel more than a cursory listening, and will wait until picking up the whole record before getting into more analysis, but I CAN tell you that the latest Exhumed effort, Necrocracy, more than holds its own against the samples I've heard. The student isn't receiving straight As across the board here, but Exhumed has never let me down, at least not with a proper full-length, and that isn't about to change with their 5th original album, a volley of tightly knit, thrashing death & grind which honors the Carcass legacy with a jubilant, blood-dripping rhythmic cleaver.

Necrocacy doesn't fall far from where All Guts, All Glory left off, only the production seems a little more compact and rich in execution. If you've heard any of the Californians' prior efforts, then the material will come as no surprise, a hybrid of Symphonies of Sickness/Necroticism era clinical rhythm progressions with a medley of carnal snarls and deeper gutturals that intertwine in a morgue room conversation while the riffs pick over the listeners' remains. Exhumed aren't quite so savage and go-for-the-throat as you might have recalled from Gore Metal or the superb Slaughtercult, but I think it's simply that, with experience, they've gone out for a more controlled production environment where the riffs aren't so blocky and overpowering, and the more carefully detailed leads (almost all of which are great here) definitely hearken back to their 2003 disc Anatomy is Destiny, where arguably they had begun this process of refinement and 'maturity'. But fear not, gore-drenched masses, because Matt Harvey and company have not abandoned you; the lyrics and themes running through the album retain that tongue-in-cheek, surgical ward wink and a nod.

The drums here are really clean sounding, with a lot of volume and bluntness to the kick which puts it on a level with the vocals as the dominant force on the record. Across this dance the thrashing, Heartwork and Necroticism inspired rhythms and harmonies which also take cues not only from the UK gods, but also from classic Californian thrash/speed metal entities like Exodus and Megadeth, and some Napalm Death blast segments for good measure. Bass lines are thick and get a chance to breathe once in a while, though they often accompany the rhythm guitar notes pretty tightly. The vocals are constantly alternating between the traditional Carcass tropes, only the rasped style here has a bit more of a splatterpunk feel to it (like The Accused) and the gutturals aren't quite so overbearing or ominous as they were on older albums (or the seminal works of their prime influence). I do wish they were a little more ghastly and off the meathook, there are points where the syllabic carnage feels too controlled, but when you consider all the vocalists are also playing instruments, they're more than functional and retain their classic personality.

Necrocracy really just comes down to the hooks, of which it provides a near ceaseless parade. Grinding chord progressions often support mid-paced grooves while the uptempo stuff is heavily laden with the traditional, pathos-inducing tremolo patterns and razor-edged harmonies. Rarely a moment passes where you won't feel the urge to whip your neck around and live out a slasher flick antagonist's wet dreams, but the majority of the patterns meted out aren't quite novel, just jerked from the Exhumed/Impaled playbook and executed with exactness. If they weren't pretty damn catchy, that wouldn't be enough here, but tunes like "Ravening", "The Shape of Deaths to Come" and "(So Passes) The Glory of Death" are visceral and exciting enough that you wanna keep spinning through them repeatedly, and the album succeeds on a number of levels: a formidable deathgrind disc, a decent thrash album, etc. Not to mention, the five bonus tracks on the limited edition add some further versatility, from a straight grind ejaculation ("Chewed Up, Spit Out") to the doomlike instrumental ("E Pluribus, Mortem)", which offers a great soundtrack for your next illegal after hours exhumation. A lot of punch here for the money, a damn jolly summer bonesaw. Take that, teach.