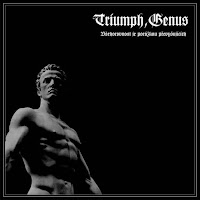 Czech black metal is perhaps one of the proudest, longest enduring and painfully underrated scenes belonging to the genre, with its practitioners split down the middle between more eclectic, avant-garde themes and sounds (Root, Master's Hammer, Stíny Plamenů) and bands who play it a little closer to the Scandinavian traditions inspired by Bathory, Burzum, Mayhem, Immortal and Darkthrone (i.e. your Maniac Butchers, Infernos, etc). Triumph, Genus is a two man project which falls under the latter grouping, with multi-instrumentalist Svar (who has played drums in another act called Sator Marte) and vocalist Jaroslav meting out incendiary bursts of intensity which rely strongly on the conventional techniques of blasting, tremolo picking and creepy chord progressions smothered in a native, resonant growl which is comparable to classic Big Boss at his harshest.

Originality is not exactly on the table here. Where Všehorovnost je porážkou převyšujících really does succeed, though, and other comparable bands might falter, is in the loudness and levelness of the vocals and instrumentation; every strike, note and bark straight to the face with seasoned skill and diligent extremity. If you come away from this without at least feeling singed by some hellish, 100mph windstorm, then you might want to stick with your sludge records, because this is clearly not your thing. On the other hand, it's not as if Triumph, Genus stick to just the one, accelerated tempo; they actually become pretty inventive with some of the slower chord progressions, like the bridge of "Obklopen snází v představě" which is eerily dissonant, groovy and almost hypnotic, or the excellent end sequence in "Což ke mně vše promlouvá jinak?", where the bass distortion is cranked up and sauteed in doom-like, riffing damnation. I'll be the first to say that areas like this are more compelling than the blast-offs, but then Svar is such a damned good drummer that it would be difficult to imagine him holding back for long. His entire kit sounds immaculate without being processed, the kick drums churn in your liver while the snares smash along with authority. He plays with the confidence of a Frost or any of the savage Polish drummers, even if not always at such a frenzied clip.

The bass is also great here, hovering below the brighter rhythms like a phantom flitting around a basement; always audible and effective, even when the notes are just mimicking the other guitars, they sound fantastic. Guitars are actually pretty dry here, without a lot of effects, which they don't need, because while they're not complex, the auditory explorations and contrasts between bursts of insanity and brooding, measured decay are strong enough to keep the imagination centered on the band's bleak, philosophical expression. There is no real wanking or indulgence, it's all competent rhythmic slicing which will not disappoint pundits of the 90s Norse and Swedish scenes, even if it's nothing out of the ordinary in terms of construction. Svar proves that he's equally competent on all three of his instruments, so perhaps the only weaker component to the music is the vocal performance. Not because it doesn't fit beautifully; the garbled, guttural barks feel like the decrepit conversations of ancient, embittered sages spun into just the proper level of reverb. Somewhere between Jari of Root and Dagon of Inquisition. The issue I had is that I just so wanted the guy to open up more with some airy screams or bloody shrieks to help break up the relative monotony of the delivery, especially in a blast area. Just to add some depth and variation.

But otherwise, Všehorovnost je porážkou převyšujících is a damned tight, traditional black metal debut which I imagine will have a lot of appeal to fans whose poisons include both the original Scandinavian scene of the 90s and the Central European masters. Lyrics and song titles are in Czech, so I was unable to fully translate, understand or appreciate them, but at the same time I always really enjoy this language for its aural cues and enunciation; the fault simply lies in myself, lacking the funds to perpetually attend University or a certification program to study the dozens of languages I would love to learn. First world problems! Anyway, while Triumph, Genus is not winning any awards for innovation of its sphere, this is hands down one of the better pure black metal recordings I've heard this summer, and another winner for Iron Bonehead out of Berlin. Concise in the Darkthrone or Maniac Butcher style, with six tracks in 31 minutes, it hasn't worn out its welcome after a half dozen cycles and it will be interesting to see where the project heads next, whether it will continue along its straightforward, destructive path or evolve to incorporate more atmospheric deviations.