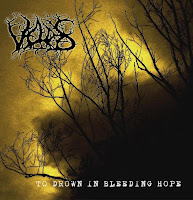 Veldes is the solo work of Slovenian guitarist Tilen Šimon, otherwise known as Isvaroth from Nephrolith, whose debut I reviewed a couple years ago. Unlike that act, which was a more decidedly face-scathing brand of Scandinavian-styled black metal, here the focus is largely upon swaths of involved, atmospheric sound reliant on more minimalistic chord patterns and melodies, secondary drum beats and even some samples. I suppose it sounds like it belongs in the Summoning camp, though this is directly centered around the guitar itself, and not the synths and masterful use of electronic percussion that those Austrians are known for. While To Drown in Bleeding Hope is not a long album by any means (36 minutes), it's certainly one that demands some patience on the listener's part.

These aren't dense compositions loaded down with riffs, and really only the first track "Through the Bitter Flames" casts the hue of a more traditional black metal blaze, with warm and mildly dissonant chord patterns that are refreshingly not all that predictable; though some of the tremolo guitar fills are bland, and even if this has the most intense beats throughout the album, they're still incredibly passive beneath those shimmering, bright guitars and Tilen's desperate, immense rasping vocal inflection. The other four tracks are more the norm, spacious and gracious and often involving catchy clean guitars accompanied by slightly swelling synth synth lines that give you the impression your watching birds take off over a lake. For instance, the openings to "Featherless Across the Burnt Skies" or "Beneath the Grieving Waters" are quite stunning, and when the metal element arrives it all feels like this vast, rustic space opening above you, as profound as the onrush of dawn, and I think that was the point here. Emotional, outdoorsy black metal as opposed to some sinister Satanic ritual being performed in a cave, with image-heavy lyrics of renewal and decay that do well to spark the listener's imagination.

Production is quite impressive here for just one guy, and though the drums feel too artificial in spots, they're not exactly the strong point, usually just keeping the pace cleanly, or informing the tempo changes. The bass lines are all rather simple and gentle, but they do their job in adding a deeper dimension to the generally high pitched rhythm guitars. I was scratching my head at the spoken word sequence in "Earth As a Nest of Bones and Debris", finding it eerily familiar, and then realized it was Viggo Mortensen's character from the film version of Cormac McCarthy's The Road! Aesthetically, it fits in rather well with the pianos and walls of distortion Šimon evokes here, and inevitable eruptions of resonant snarls. In general, the whole album possesses a consistency to it which flooded my thoughts with imagery of mists, hazy golden mornings, wildlife and an absence of mankind and civilization, so those seeking out a more majestic, rural black metal sensibility will likely get something out of Veldes. It's not exactly intricate or complex, and I think the rhythm section could be a little more ambitious to produce stronger results, but if you're looking for breathing, captivating black metal with a folk tint ala Summoning, Mirkwood, Elffor, Kroda, Falkenbach, or Drudkh it's worth hearing.