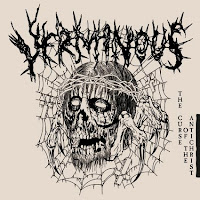 2013 is a year of some celebration for Sweden's Verminous, as they released their first full-length (The Unholy Communion) in a decade to some anticipation amongst the underground. Likely they want to make the best of this new era of productivity, so a cheery little 7" released through Blood Harvest makes sense for collectors and fans, and I recall that they had a similar release alongside their 2003 debut. Contextually, there's not a lot of meat on these bones, and only one new original track (less substantial than Smell the Birth of Death), so the value here is gonna vary depending on whether or not you pick these 7"s up for their listening merits or just to own a copy. Eight minutes, three tunes, two of which are covers, but I will say that the production is one to die for...

Verminous have always done a good job at not cloning their obvious Swedish forebears too closely, so if you're expecting that Entombed/Carnage guitar tone and structure you'll be half disappointed. There are definitely similarities, in the use of d-beats and ominous atmospherics where applicable, like the opening moment with its organ and lead eruption, but they have a pretty distinct grind and hardcore influence which is like Discharge and Repulsion in collusion with Nihilist. Slow, stark chord patterns interspersed between fits of tremolo picking old school phantasmagoria, with barked vocals and tight-as-fuck blast beats. If you've enjoyed The Unholy Communion, this is quite close in architecture and production to much of that album. Once it begins to rage, the riffing progressions aren't all that memorable or compelling, but it sets itself up well and then dishes out an aggressive payoff. And as I hinted above, the sound is just so clean...usually these bands go for the ruddiest guitar tone to the point where they smother the rest of the band (except the vocals), but "The Curse of the Antichrist" is loud, powerful, and not too arbitrarily noisy.

I was less into the cover songs, though. Of the pair, Nuclear Assault's "Hang the Pope" is the more interesting selection, since the whole point of it was as a throwaway, humorous, political statement that the New Yorkers used to grease their grindcore elbows. The Swedes play it close to the belt, with a muddier, thicker bass intro than Dan Lilker had mustered in the mid-80s, and a destructive punctuality to the rhythm guitars which feels more forceful than the original, but frankly this wasn't an interesting tune in '85-86 and it has lost some of its comical value today. The other choice, "Revel in Flesh" is more obvious...too obvious? How many bands have already covered this one? Not to mention, while competent and accurately played, it just doesn't have that same sense of oppressive morbidness that the Left Hand Path version possessed. A safe rendition with a fraction more of a grinding impulse, and not terribly impressive.

But, hey, it's not like Verminous or Blood Harvest are charging you an arm and a leg for this thing. It's meant to be a short, fun record, a chance for fans to throw a few more bucks at their underground champs and have something that will appreciate in value one day. There are better 7" out there with more original material, and both of the Swedes' full-length records have better songs than this, but at least "The Curse of the Antichrist" itself is worth hearing, so it's not like this is just a bust that you'll leave hanging in its papal plastic. Bam.