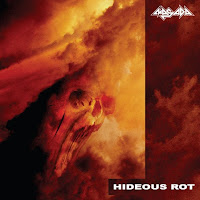 Hideous Rot was ultimately a frustrating listen, because while I might appreciate that a band wants to present its material in the most primitive and 'honest' form, the songwriting here simply deserved better. I can only imagine how good these same tunes would have sounded with a budget to them! Old school, clinical and evil sounding riffs with hints at anything from Gorguts to Suffocation to old Pestilence Malleus Maleficarum era stuff due to the surgical, sinister harmonies slicing up a cut like the opener "Hideous Cerebral Pulp". What's worse, Masada is a sort of US underground death metal supergroup, with members of Crucifier, Rellik, and even Craig Smilowki (ex-Immolation, Goreaphobia) on the drums here, so I think they could have put a little more care into the production...as it stands, I'd hardly even qualify Hideous Rot as a decent demo level in sound, it's more like a couple of rehearsal sessions strung together. Now, granted, this sort of raw, stripped down sound can be done well (like Macabra's Blood-Nurtured Nature), but not this time I'm afraid.

How they managed to get Clive Jones of psychedelic/prog rockers Black Widow to throw a freak out flute instrumental on this thing is bizarre, but the placement (second track) is a little strange and I'm not sure it really added to the recording in any appreciable way. I'd rather hear the guy jamming the wind instrument into one of the death metal tunes. Wouldn't that be something? Is this eclectic? Sure, and it felt like something Cadaver would have done in their early years, but the band's original material here is far more involving, threaded with precision riffs and grooves that snatched me back through time to records like Effigy of the Forgotten, Spiritual Healing, Testimony of the Ancients, etc. Nasty little harmonies create plenty of otherworldly, morbid atmosphere, a sense that one is watching one of those sped-up film reels of animal or human flesh decaying and sprouting with maggots and rot, the bass and drums are in general pretty tight, but the rawness of the guitar tone and dryness of the bass on the first few cuts is distracting. Other tunes like "Suffer Mental Decay" are a little meatier, but this creates an inconsistently on an already finite track list which involves only four tracks to begin with, and I guess I felt like I was only being fed scraps of the band when they're capable of a five-course meal.

Vocally, there's nothing here you hadn't already experienced from a Ross Dolan, Glen Benton or Craig Pillard, deep and nihilistic gutturals accented by occasional snarls, but I will admit I enjoyed the more morbid, echoing, cavernous tone on "Toxic Unreality" more than the drier lines elsewhere. The tunes are busy, but complex only in the context of the early to mid 90s, when a band like Death was considered progressive or technical. Tempos are generally mid-paced, especially the guitars, while the drums only burst in a rare,  measured blast like the beginning of the EP. Occasionally I felt like the drum mix was shoddy, or that all the instruments weren't being recording in the same room/session, but it's listenable to the extent that you can make out most of the notes and individual drums. In the end, while there are good players and ideas present, and Masada are more than capable of honoring the nostalgia from which their music is born, I just felt like sending the songs back and begging for a remix or a full-on studio incarnation with higher (or at least more consistent) production values. Hopefully we'll get that with future material, because Masada the band is simply superior to the raunchy, unpolished disposition here.