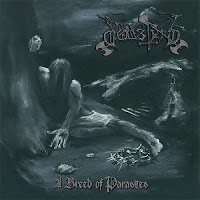 I've not had the greatest track record for appreciating Dodsferd, whose past albums range from typical raw/suicidal Scandinavian black metal to outright tedium. That's not to say he hasn't put out a few decent discs like Death Set the Beginning of My Journey, but really the only way I would have found his output more impressive was if I hadn't actually already been listening to bands like Burzum and Mayhem since they first reared their ghastly countenances internationally in the early 90s. I think Wrath is legitimately interested in preserving this style of agonizing, feral, cult black metal, so don't misinterpret me, but there are only so many rehashed riffs and ideas I can stomach before it all sort of blends together into the background. Thus, when the last, wavering ambiance of "Burning the Symbols of Your God" faded, and I found myself wanting to listen through this new album again immediately, I have to admit I was surprised...A Breed of Parasites is pretty good, and it might just prove my favorite Dodsferd to date.

But this is a rather strange, unique album in structure. Six tracks in about 33 minutes, and half of those are shorter, ambient pieces. In fact, when you take into account that the 9 minute centerpiece "Eternal Bliss... Eternal Death" is a Judas Iscariot cover, there's not a lot of original black metal on the record. But, for instance, "Days of Mental Deterioration" is a pretty fantastic tune, with textured chord-flows and tasteful tremolo picked licks that erupt into these glorious progressions while the vocals fluctuate between a two tiered snarl and howl to a more tortured howling redolent of Burzum or Weakling. Not to mention that the riffs just don't stop here, and there is plenty enough variation to fill out the seven and a half minutes without growing redundant or boring. "Burning the Symbols of Your God" is an altogether different beast, slower and more atmospheric as it focuses on the howled, suicide vocals while the chords segue into these melodic parts with cleaner rhythm guitars, simple effective leads and thick, prominent bass-lines. These two are probably the best Dodsferd songs I've experienced, hands down, both with replay value, and the cover track is also a nice choice. The Greeks drag it out about three minutes longer than the original, but the end with its angelic synthesizers is adequate payoff for the considerable, roiling and meandering sadness imparted in the slowly paced riffs leading up to it.

Those ambient tracks? Also really interesting. The band didn't just hit a few notes on a keyboard and then let them resonate for nine minutes, these are each pretty distinctive and concise in their own right. "The Burden of Feeling Alive" is haunted, guitar feedback on a number of levels, with some plucked strings disintegrating into the acid of a throbbing synth; "...Til the Day You Die" has a more bass-like depth infused with resonant, noisy guitar droning and "An Unbearable Pain" seems like a ritualistic piece with tribal drumming that helps set up the momentum for "Days of Mental Deterioration". Each of these works well in its placement across the track list and effectively amplifies the sense of mood and depression that you just won't get out of a lot of derivative 3rd-4th generation black metal riffing alone. The pieces all really fall into place here, and it helps a lot that the production is really solid. Bass is brooding and audible, drums natural and energetic, and the Wrath rasping sounds phenomenal, probably one of the better Greeks at this style, with the perfect level of reverb and a convincing ghoulishness. Another detail I enjoyed was the overtly bluesy lead guitar, a hit or miss technique in black metal that flourishes here.

With only about 23 minutes of original content, A Breed of Parasites is surely not 'substantial' and it might function more realistically as an EP than a full-length, but that didn't prevent me from becoming engrossed and engaged in all that was happening. The sounds and songwriting are more firmly rooted in sadness or ominous darkness than face-scathing evil, but clearly Dodsferd take us to that other place, a mirror universe where sadness is existence and sunlight struggles to pierce the cloud cover. Grim, glorious, and gravebound.