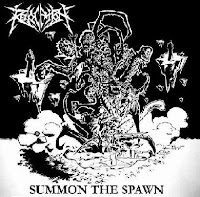 Though it was eventually rendered obsolete by Revocation's debut in 2008, Summon the Spawn was my first exposure to the studio side of the band and it was distributed at the band's earlier shows under this incarnation. In reality, they had formed in 2000 as Cryptic Warning and self-released a full-length under that name (Sanity's Aberration) in 2005, with a not-dissimilar mash-up of styles, but this was by all reports a superior branding and came out around the time their polished and explosive live gigs were really starting to turn some heads (including my own). Summon the Spawn was a humble offering, really, just three tracks at around 16 minutes, showcasing their precision playing and studio chops, but while it does decently capture the excitement of their myriad talents, it does suffer from somewhat forgettable songs that don't leave a heavy emotional resonance upon the listener.

That said, this sort of punchy, clinical death/thrash hybrid was all but unheard of here in the New England region, drawing evenly from 80s tech thrash, Suffocation-styled NYDM and Floridian bands like Cynic, Atheist and Hellwitch who all wrote, at some point, with a similar penchant for jerking riff construction and progressive metal ideas. Summon the Spawn runs the gamut of such ideas, from the workmanlike neck breaking psycho-thrash of "Summon the Spawn" itself to the blazing, beautiful lead melodies embedded in the closer, "Suffer These Wounds". The bass lines are fat and pluggy, the drums utterly clear as they snap, pop and thump along to the varied tempos, and the rhythm guitars almost constantly engaging themselves with something different than the last few measures. Revocation was packing plenty of variation into its songwriting, and still does, but in these earlier years there was no real sense that they were overexerting themselves. Their ideas made sense in correlation and they kept the songs tight rather than cluttered. That's not to say I find the riffs here even marginally as memorable or unique as their influences, but they work, and what's more, the band was able to pull this stuff off flawlessly on the stage...

My usual adversity to the vocals did apply back then, but by then I hadn't had time to really get used to the reason I didn't enjoy them. They felt a little fresher, a little bloodier. There are moments here like in "Summon the Spawn" where the backing gurgles are decent, and in my opinion, would have been a better choice for most of their records, even if they would have created a starker contrast against the 'prettier' musical choices, and run the risk of seeming generic when streamlined against the pure tech death of the 21st century. But I definitely credit the production on this thing, recording at Damage Studios in Southbridge, MA (which the band would use again), because it's so perfectly level in capturing the 3-piece's energy and prowess, and honestly one of the better sounding releases in their backlog. The mix is polished and rich, and death metal pundits who loathe clean recordings will probably hate it, but for the purposes of this brand of scientific method performance it's the right fit, honoring where they came from and where they were headed.

If Summon the Spawn has problems, it's just that the songs aren't among their best, and unless you were hanging around the East Coast scene in the middle of the first decade of the 21st century, it doesn't have a lot of context. All three tracks were included with Empire of the Obscene (2008), and sound better there amongst their neighbors, so it's really more of a collector's item/cdr/demo thing (though their 'real demos' were as Cryptic Warning) and doesn't carry much value in hindsight.