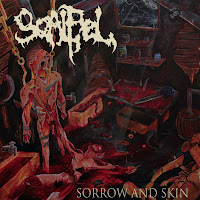 Scalpel is another local Massachusetts band, that, up until now, I had honestly never heard of, but thankfully a pretty strong entrant into a field that includes acts like Abnormality and Zealotry. What's more, they've got a pretty curious take on classic 90s brutality which I'd liken to a more 'musical', multidimensional or visionary alternative to later Barnes era Cannibal Corpse (i.e. The Bleeding) interspersed with a number of outright grinding onslaughts and Morbid Angel level technicality. The primitive aesthetics are apparent, from the throwback cover artwork to the calamitous blasted sequences and dual guttural/snarl vocals, this definitely doesn't sound like your typical modern tech death with its ultra brickwalled and polished production parameters.

Sorrow and Skin is one of those rare records in this niche that you'll feel compelled to listen to through its entirety, which speaks a lot for the effort and love that went into the songwriting. Few of the individual riffs or components might come off as fresh as original when broken down, but it's not like the band has pretensions of becoming trendsetters: they love a variety of old school death metal and honor it by butchering your ears with a crafty barrage of varied riffing progressions. The wailing leads in tunes like "Ripe" or the opening of  "Mincemaster" are an immediate standout, desperate and memorable and not at all the sort of clinical and methodic spasms you'd expect from this genre. As for the rhythm guitars themselves, you've got a lot of those deeper, ominous octave chords sliding around, frenzied tremolo patterns picked individually or through chords, and a surprising level of melody embedded into the churning morass. But even better, when this band breaks out into a groove, like in "Mincemaster", they keep it interesting, and seem to entirely eschew the predictable, unimaginative chug patterns so many death and 'core bands lapse into.

They'll even throw a total surprise at you, like "Sorrow and Skin" itself which starts is like an old Death tune imbued with cleaner guitars before picking up the pace. And speaking of pace, the drummer here is maniacal with his kicks and snares blazing away, peppering the beats with loads of extra strikes that always give the music a more harried, chaotic sensibility that keeps the listener on edge. Several of the songs here, like the creepy, surgical "Skullscraper" really highlight the oozy bass guitar tone, though there are other moments where I felt it got a little lost under the pummeling precision of the guitar picking. In terms of vocals, there is nothing out of the ordinary. A strict guttural accented by impish retching, in the Carcass or Deicide mold, but they occasionally incorporate a lighter, grotesque growl like in the verse of "The Black Juices". I'd say this might be where the band most lacks distinction, but they're nonetheless effective, and the vocalists are both multitasking, so you can't always expect the world.

All told, Sorrow and Skin is a fine full-length debut that helps reinvest me into one of the genres I so loved growing up and so earnestly continue to support. That I could wedge this in between listens of The Bleeding, Domination,  Effigy of the Forgotten, Necroticism or even a few Intestine Baalism records and have it fit right in speaks reams of the balance of brutality these gentlemen can muster, and I enjoyed that they were so shamelessly 'songs first'. Rarely on this record did I feel like they just strung a bunch of random jumpy note patterns together to impress anyone with their randomness. The songs all go somewhere, and several of these ("Sentinels of Severed Flesh", "Sorrow and Skin", "Ripe", etc) are among the best I've heard in the genre of late. The album might not be perfect, and I didn't like every track equally, but this is a promising addition to the New England scene which brings its own style and confidence to the game, and its pretty much a given that fans of anything from None So Vile to Pierced from Within to Gallery of Suicide will find something in here to admire.